Kepler's Supernova in the Spotlight 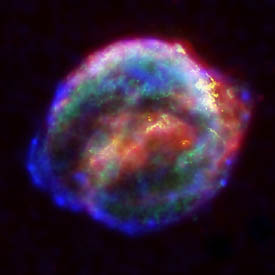 Data from three space-based telescopes show the Kepler Supernova Remnant in multiple wavelengths. The blue and green regions depict the X-ray data (Chandra X-ray Observatory), the red represents the infrared emitting regions (Spitzer Space Telescope), and the yellow areas are the visual-light views of the remnant (Hubble Space Telescope). In some areas the blue, red, and green observations combine to appear white.

Look closely — this beautiful scene truly is more than meets the eye. By combining images from infrared, visual, and X-ray telescopes, this mosaic of Kepler’s Supernova Remnant reveals an expanding shell of metal-enriched stellar material powered by a shock wave that rocks everything in its path.

Four hundred years ago, in October 1604, skywatchers — including astronomer Johannes Kepler — first saw a bright new star shining at magnitude –3 in the constellation Ophiuchus. It remained bright for weeks. At the time, no one knew what is was, but now we recognize it as the last observed supernova within our galaxy.

A team led by Ravi Sankrit and William Blair (Johns Hopkins University), used multiwavelength data from three NASA space observatories — the Chandra X-ray Observatory, the Hubble Space Telescope (visible light), and the Spitzer Space Telescope (infrared) — to image the scattered remains of the explosion. The wide range of emission in the remnant is the result of the supernova’s expanding shock wave colliding with previously ejected material from the progenitor star. Different wavelengths generally represent varying temperatures within the interstellar gas.

Based on the team’s analysis, the dense clumpy visible-light nebula, shown in yellow, is embroidered by knots and filaments depicting instabilities left in the wake of the explosion. Other features include an infrared shell of dust, shown in red, thought to be similar in composition to the chemically diverse material that condensed to form the Sun and solar system. Also, stretching across 14-light-years is a shroud of high-energy (blue) and low-energy (green) X-ray-emitting gas, still expanding with an average speed of 2,000 kilometers per second.

Though the view of the supernova remnant is becoming clearer, the mystery behind the star that created it remains cloudy. Of the six observed supernovae in our galaxy, the type of star that formed SN 1604 continues to elude astronomers. The relatively young supernova remnant, still in its early stages of evolution, hides the central star with heavy gas clouds, thereby obscuring the once massive star while simultaneously creating this eye-catching sight.