NASA's Lunar Atmosphere Dust Environment Explorer will soon end its mission — but not before swooping close to the lunar surface and enduring the frigid darkness of a total lunar eclipse.

An artist's concept of NASA's Lunar Atmosphere and Dust Environment Explorer (LADEE) spacecraft orbiting the Moon.[/caption] LADEE was launched last year on September 6th on the first-ever use of the Minotaur rocket (full specs here), and the mission was never intended to last a long time. After settling into lunar orbit in mid-October and completing its checkout, the spacecraft started its observations of gas and dust hovering over the Moon. 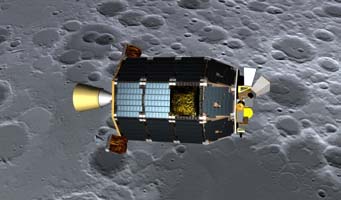 An artist's concept of NASA's Lunar Atmosphere and Dust Environment Explorer (LADEE) spacecraft seen orbiting near the surface of the moon.


NASA Ames / Dana Berry
The craft's orbit was relatively snug, ranging from as close as 20 to 50 km at low point to as high as 75 to 150 km. Science observations were only expected to last 100 days, ending early in March. But flight controllers have been so frugal with fuel reserves that the mission got a month-long extension — and, with that, a chance to do some daring low-level passes over the lunar landscape.

"LADEE's science cup really overfloweth," said project scientist Rick Elphic (NASA Ames Research Center) during a teleconference with reporters on April 3rd. One discovery is that a veil of micron-size dust particles continually encases the Moon (created by a constant rain of meteoritic matter onto its surface). The spacecraft picked up the presence of helium, neon, and argon right away in the Moon's ultra-tenuous transient atmosphere (technically called an exosphere), and it's detected atoms of magnesium, aluminum, titanium, and oxygen — the remnants of rocky minerals blasted upward from the lunar surface.

Curiously, the spacecraft didn't detect any change in the exosphere's composition following the arrival of China's Chang'e 3 lander on December 14th. There was a spike in exospheric dust about that time, but mission scientists attribute that to surface impacts during mid-December's Geminid meteor shower.

Elphic says more research on LADEE's findings will be published in the coming months, but its science team already presented many preliminary results at the Lunar and Planetary Science Conference a few weeks ago. 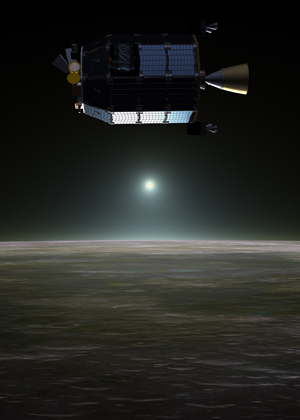 the orbit of NASA's LADEE spacecraft brought it within 15 miles (25 km) of the lunar surface, close enough to sample the tenuous gas and ultrafine dust particles known to hover above the Moon. This portrayal shows the spacecraft backlit by sunlight scattered off dust particles during a lunar sunset. Click on the image for a larger version.

Every time LADEE has flown lower, Elphic says, it has discovered something new — a statement echoed by Butler Hine (NASA Ames Research Center), LADEE's project manager. So, given a perfectly functioning spacecraft, its primary science goals completed, and fortuitous timing, the mission team gets to pursue some bonus (and very daring) science objectives.

The orbit of NASA's LADEE spacecraft brought it within 15 miles (25 km) of the lunar surface, close enough to sample the tenuous gas and ultrafine dust particles known to hover above the Moon. This portrayal shows the spacecraft backlit by sunlight scattered off dust particles during a lunar sunset.[/caption] First, LADEE's close point is going to be dropped to a very low altitude — just 3 km (2 miles) up — to observe the lunar terrain and measure the dust distribution close to the ground. Those crater-skimming passes should start this weekend. Flying this close to the surface does not come without risks: the Moon's gravity is very uneven, and at such low altitudes there's a chance that an unforeseen perturbation will cause the spacecraft to plunge into a fatal trajectory. "Our low point this weekend occurs as we pass over the Apennine Mountains," notes Elphic, at latitude 22°: north and longitude 0.9° east. "Our path will take us slightly north of the crater Conon, and north of an Apennine peak named Mons Bradley." But the team is confident that LADEE won't clip a mountaintop or crater rim inadvertently. Regardless, comments Butler, the potential payoff of doing such low-altitude observing and data-gathering is worth the risk, especially since the primary mission is "in the bag." Second, skywatchers and the LADEE team both have a keen interest in the total lunar eclipse that's coming on the night of April 14–15. This eclipse should offer a grand celestial spectacle as seen from Earth. But what does it mean for a spacecraft orbiting the moon? The answer is simple: darkness and deep cold. LADEE's systems weren't designed to be out of sunlight for long, so the eclipse offers NASA's engineers a way to test how the spacecraft and its instruments respond to extended darkness (about 4 hours' worth in this case, notes Hine). LADEE will fire its engine for the last time on April 11th, redirecting it onto a sure-fire, but gradual collision course somewhere on the farside — well away from any historical landing sites — at 1.6 km per second (3,600 miles per hour). While LADEE makes its final descent on the lunar farside, the science team will lose radio contact. So the precise time and location of the crash won't be known — at least initially. Afterward the team hopes to identify the impact site and reconstruct the craft's final moments using high-resolution images from NASA's Lunar Reconnaissance Orbiter. To make the intentional, destructive crash of a $250-million space robot more interesting, NASA has set up what is essentially a massive betting pool, the Take the Plunge challenge, allowing the public to guess LADEE's exact crash time. The winner gets a certificate and bragging rights. Any wagers from S&T.com's visitors?

There's some confusion here...NASA is saying LADEE could crash before April 21. If that is so, then there is NO way to ensure that the crash is on the far side of the moon. If as your article states LADEE is travelling at 5000 mph then it takes a little over an hour to complete an orbit. Thus there will be at least 20 orbits LADEE will perform on the expected date of crash; half of each orbit LADEE will be on the visible side of the moon.

What gives? Either NASA is sure (within a few minutes) of when LADEE will hit the moon, or else it has no idea whether it will hit on the near side or the far side.

didnt a meteor hit the moon that could be seen from earth not that long ago? what about the readings from that impact? just curiose

LADEE's orbit is excentric, meaning the orbit has a high point and a low point. At present, the low point (perilune) is on the far side of the moon, and will stay on the far side of the moon for the duration of the mission. As LADEE's orbit degrades, the perilune will be the first point in it's orbit to contact the surface of the moon. That is WHERE the impact will take place. The only question is WHICH ORBIT (WHEN) will this event take place. Hense the contest.

Hi Dave...I got the 5000 mph figure from the article, the only calculation I did was an approximation of the circumference of the moon, thus my estimate of a little over an hour per orbit. And Steve Szuminski--thanks for the answer!! However, there's still some confusion. The article states: "Our low point this weekend occurs as we pass over the Apennine Mountains..." The Apennine Mountains on the moon are on the NEAR side. This seems to contradict your statement that "[a]t present, the [perilune] is on the far side of the moon, and will stay on the far side for the duration of the mission." Soooooo, something still hasn't been (a) all worked out yet or (b) explained so that there are no statements warring with each other. I do want to know!!

OK, I think I got it figured out. While perilune is on the far side of the moon, it is still possible to come closer than perilune to the surface because certain features of the near-side moon (e.g. the Apennines) rise above the mean perilune distance. Yes?

So, I'm no orbital specialist, but the moon will have rotated not quite 180 degrees between April 4 and April 15 which I assume means the perilune would move relative to the moon that rotates under it. Or is the orbit locked to the moon's rotation?

Nasa's planned burn on April 11 has the capability to reset where in LADEE's orbit the perilune is located. From that moment on, the impact is predicted to happen within 10 days at most. In 10 days the moon rotates only one third of a rotation. Whether the orbit precesses or not (and I do not know), the perilune can only change one third of the way around the moon. It is entirely feasable to plan the burn so as to have that third be entirely within the far side of the moon.

I'm always amazed at the ingenuity of spacecraft designers & controllers and what they dream up. Off the top of my head, I don't recall the mission name but there was a craft designed solely for orbital viewing of an asteroid (Ida maybe? Toutatis?) Since that craft's primary mission had been accomplished, the controllers decided to attempt a landing on the surface; their skill coupled with low gravity made it a success. This gave us the first truly close-up view of an asteroid's surface.

It's cool when situations such as LADEE's allow scientists and astronomers to take risks and try things they initially hadn't set out to do.

Responding to some comments above, low lunar orbits do not precess nearly as much as orbits about the Earth do. So, the perilune remains more or less fixed in inertial space. The difference from Earth orbits is due to the Earth's equatorial bulge. That bulge applies a gravitational torque to the spacecraft's orbital motion causing the orbital precession. The moon does not have such a large bulge, although it does have many small irregularities.

However, the Earth applies a perturbation to the LADEE orbit, and this is larger than the Moon's perturbation to orbits about the Earth. This perturbation causes the eccentricity to drift, usually causing the perilune (low point) eventually to fall below the lunar surface, ending the mission. Fuel must be expended to tweak the orbit periodically to avoid this. There are some useful orbits where this perturbation is minimized - allowing for long missions (like LRO) with minimal fuel expenditure.