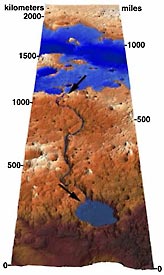 The discovery of a huge ancient lakebed in the equatorial highlands of Mars, based on data from Mars Global Surveyor's camera and altimeter, bolsters the widely held but still controversial view that Mars supported a widespread hydrosphere and warm climate during its early history.

A team led by Rossman P. Irwin III (National Air and Space Museum) reports the findings in this week's Science. While some of the shoreline and channel features were known, it required MGS's sharp image resolution and precise laser altimetry to identify the entire lakebed, estimated to have covered more than a million square kilometers approximately 3.7 billion years ago (Mars's late Noachian period). A 900 km channel called Ma'adim Vallis, apparently carved by the lake's sudden outflow, leads to the northern lowlands — which, according to some analyses, may once have contained even larger lakes and perhaps even an ocean. The carving of the channel had previously been attributed to groundwater.

This swath of Mars south of the head of Ma'adim Vallis reveals where water from an ancient lake emptied from a basin. Bold lines mark the 1,100-meter elevation of shoreline features. The water breached the low point of the basin rim (A and B) and cut riverbeds downslope (C, D, and E).

Irwin and his co-authors Ted Maxwell, Robert Craddock, and David Levirington (all of the NASM) and Alan D. Howard (University of Virginia) say Ma'adim Vallis spills from the lowest rim of a drainage basin at exactly the elevation of the lake's high-water marks. At this altitude (1,100 meters) around the basin, there is a consistent break in slope, with the region upward from that level being much steeper and dissected — suggestive of shoreline erosion — while the downward slope is gentle and smooth or ridged — suggesting underwater deposition. Irwin and his team say the lake could have been sustained by springs, precipitation, or both.

Furthermore, the altimetry indicates that along the 180° meridian, the inferred lakebed represents the lowest elevations seen anywhere from the south polar region all the way to the northern lowlands. If a stable water table existed anywhere within about 1.5 km of the highland plateau level, the authors say, the basin would almost certainly have been a lake — with a volume of 480,000 cubic km of water.

"The size, constant levels, and interior morphology" of the lakebed, the authors write, "require a warmer paleoclimate and a long-term, recharged, stable highland water table more than 3.5 billion years ago."