As I prepare to end my summer internship at Sky & Telescope, I find it ironic that the last two stories I write both concern the "dark" unknowns of astronomy. Dark matter, like dark energy, is something that astronomers can't seem to escape. Some argue that that's only because we don't want to — we like having a crutch to lean on, if you will — but this opinion hasn't trickled down to the textbooks I've used. 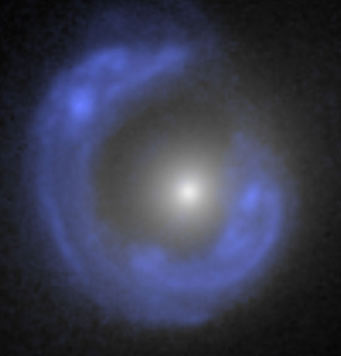 Hubble image of a gravitational lens. The blue arc is the color-enhanced "Einstein ring," the ring of images of the background galaxy behind the elliptical lensing galaxy in the center.

A survey by an international team of astronomers recently released results that once again bring dark matter into the discussion. Using a new approach to weigh galaxies, the researchers explored the relationship between mass and luminosity for medium- to high-mass elliptical galaxies. Their study of 70 galaxies using the Hubble Space Telescope's Advanced Camera for Survey (ACS), in conjunction with information from the Sloan Digital Sky Survey, confirms that for progressively larger elliptical galaxies, their masses do indeed increase more rapidly than their luminosities. This discrepancy raises the possibility of a higher fraction of dark matter to regular matter in larger galaxies.

Scientists normally estimate the masses of distant elliptical galaxies by measuring their sizes and the velocities of the stars within them, explains team member Adam Bolton (University of Hawaii). With these quantities and a little math they calculate the dynamical mass, which isn't the true mass but does relate to it — exactly how, though, depends on things like the stars' orbits, the distribution of material throughout the galaxy, and the ratio between stars and dark matter.

For about 20 years astronomers have known that one elliptical galaxy twice as massive as another will be significantly less than twice as luminous, Bolton says. Scientists have tossed around two main explanations for why. On the one hand, they may not have accounted for something in the details relating dynamical and actual masses. On the other, there could be some sort of systematic increase in how much mass larger galaxies have compared to how much light they emit.

Above image split into parts. The top image is the background galaxy, the light of which bends around the lensing galaxy (center) to form a ring of images (bottom).

Instead of calculating dynamical masses, Bolton and his colleagues used gravitational lenses to estimate the galaxies' true masses. These lenses occur because mass bends the space-time around it. When an enormous object — like an elliptical galaxy — lies between us and a more distant galaxy, the light coming from the background galaxy travels through the space-time dip that the nearer object creates. The dip acts like a lens, redirecting the light. Often, multiple images of the farther object appear in an arc around the lens, and can be up to 30 times brighter than the distant galaxy's original image.

The astronomers used the lens images, as well as the distances to each galaxy, to calculate the nearer galaxies' masses. Their true-mass measurements, combined with previous dynamical measurements, show that the relationship between dynamical and actual masses does not vary like the mass and luminosity one does. So the higher mass-to-light ratio appears to be the right answer.

There's still much to debate, Bolton cautions. The results don't explain what the extra mass is. It could be that there's a larger fraction of dark matter to regular matter in these galaxies. The stars themselves might also have a higher mass-to-light ratio.

"The consensus based upon modeling of stellar populations and simulations of galaxy evolution seems to favor the dark-matter explanation," Bolton says. "But for those with a deeply held objection to the entire concept of 'dark matter,' the stellar-mass effect will of course seem more plausible."

The team did see a slower decline in mass density than light density as they looked farther out from the galaxies' centers, Bolton adds. This slower decline requires some form of unseen matter. The other explanation — that the stars themselves have a different mass-to-light ratio based on their position within the galaxy — Bolton finds implausible.

The results prove the applicability of the lens-weighing method and open the door for "other people to do clever science that hasn't occurred to us," Bolton concludes.

I am shocked to finally learn that young Camille M. Carlisle, whom I considered to be a new staff writer for S&T has been a summer intern! Her clear, concise writing on cosmological issues has educated and entertained me all summer and I have found her work to be some of the best since Sue French joined S&T. She has taken often new research and boiled it down to a form interesting to advanced amateurs and accessable to beginners as well. Well done Camille! I, for one, hope you come back to S&T on its bloggs and hardcover pages!

I must agree that Camille's writing is always easy to understand and fascinating to read. Hopefully, she will return. In the meantime she will be missed.

I cannot take all the credit: I had A LOT of help from the editors here at S&T. But thank you both very much, your praise is the perfect note on which to end my internship. And yes, I hope to come back after I finish school!

Hi and many thanks for your articles. There is an enormous amount of science involved in measuring galaxy mass. Is it possible that the extra mass could be in the black holes and we are making some error in measuring the impact of increased mass? Keep up the great work.
walt

Camille, few days ago for the very short period there was another one interesting article about prediction of unpredictible behaviour of Eta Carinae (Eta Carinae Prepares for X-ray Crash posted on AUG 1st, 2008). At the moment there is only a cached copy of this article available on the net (Google Search with all words: "Camille M.Carlisle Eta carinae".
What about this story?

I'm revoking my previous question. The article is back. Thank you.

where Gij/k are the components of a gravitational energy tensor. The total energy of the gravitational field is always zero; Gij/k and Tij vanish identically; there is no possibility for the localisation of gravitational energy (i.e. no gravitational waves). Also, GR violates the experimentally well established conservation of energy and momentum, so if the usual conservation of energy and momentum is valid (there is no experimental evidence to refute it) then GR is invalid. Einstein invented his pseudo-tensor by which he and subsequent big bangers claim that his gravitational energy can be localized. However, his pseudo-tensor is a meaningless concoction of mathematical symbols because it implies the existence of a 1st-order intrinsic differential invariant which depends only upon the components of the metric tensor and their 1st-derivatives (contract his pseudo-tensor and apply Euler’s theorem). But the pure mathematicians Ricci-Curbastro and Levi-Civita proved in 1900 that such invariants do not exist! Einstein and subsequent big bangers resort to linearisation of Einstein’s field equations to localize his gravitational energy. This is nonsense because linearisation implies the existence of a tensor which, except for being precisely zero, does not otherwise exist, as proven by H. Weyl in 1944. So LIGO, AIGO and VIRGO are destined to detect nothing. And no dark matter.
http://www.sjcrother.plasmaresources.com/Unicorns.pdf
http://www.ptep-online.com/index_files/2007/PP-09-14.PDF
http://www.ptep-online.com/index_files/2008/PP-12-11.PDF