In February 1993, Australia's 50-inch Mount Stromlo Observatory telescope caught this star brightening 170,000 light-years away in the Large Magellanic Cloud due to the gravitational lensing effect of an unseen foreground star. By January 1994, it was back to its normal brightness.

Astronomers have a new set of scales for measuring the masses of stars — by watching the way a star's gravity bends the light of a distant background star. According to Einstein's general theory of relativity, every massive object warps the space around it, deflecting the path of anything — including light — that passes nearby. Thus, a massive star's gravity can act like a magnifying glass, making the stars it passes in front of appear to brighten, a phenomenon called microlensing.

In 1993 the Massive Compact Halo Object (MACHO) project, which surveyed millions of stars for signs of microlensing, recorded a very unusual event in the direction of the Large Magellanic Cloud (LMC), a satellite galaxy of the Milky Way. A star in the LMC brightened and faded over a period of 75 days, but unlike in other microlensing events, the star's color seemed to change too. That's because the lensing star, which is usually too faint to see in these passages, was uncharacteristically bright and contributed its own light. In fact the star was bright enough for the Hubble Space Telescope to image it several times after it had drifted away from the line of sight to the background star. 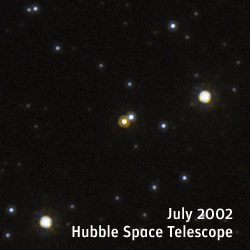 From these observations, astronomers determined the lensing star's distance and its velocity relative to the background star — information that then allowed Andrew P. Gould (Ohio State University), David P. Bennett (University of Notre Dame), and David R. Alves (Columbia University) to calculate the lensing star's mass. It turns out to be a red dwarf, only 1,800 light-years from Earth. At only 10 percent the mass of the Sun, the lensing red dwarf is just barely massive enough to be considered a star at all.

"That's one of the interesting things about it," says Gould. The fact that it is such a low-mass star means it could be used to help test theories describing the interior of stars. In particular, he says, it may allow astronomers to infer how much mass an object must have before it can fuse hydrogen, the main fuel source of stars. Getting the precise mass and brightness of a star very close to this limit would help astronomers calculate exactly where the boundary is between stars and brown dwarfs (which are not massive enough to sustain hydrogen fusion).

Astronomers are especially interested in learning more about stars that contain fewer heavier elements, called "low-metallicity" stars. "We think [the lensing star] is probably a fairly low metallicity star," says Gould. "Where exactly the hydrogen burning limit is for more metal poor stars is something we have theories about but not too much data."

Gould and his former-student Jin An used lensing to measure the mass of a star in a binary system in 2002, but this is the first time the technique has been used for a single star. Astronomers routinely calculate precise masses for stars in binary systems by watching the way they orbit each other, but there is no generally applicable technique for measuring masses of single stars outside the solar system. Astronomers can get good masses for some single stars by watching the way they vibrate, a technique akin to the way seismologists study the interior of the Earth by recording earthquakes. However, astroseismology only works for stars of similar mass to the Sun, and the targets must be within a few hundred light-years of Earth. Microlensing has neither of these limitations.

Of the thousands of events detected by the MACHO project, there is only one other for which this technique might be applied, and even so, it will take several years for the lensing star's motion to carry it far enough away from the line of sight to the background star for the necessary measurements to be made.