Scientists using the diminutive KELT North telescope have discovered two extrasolar planets, one of which is unlike anything yet seen. The finding provides researchers with raw material to study exoplanets, but it also demonstrates that sometimes, the little guys can still win big.

Officials from the European Southern Observatory announced early last week that they will move forward with construction of the European Extremely Large Telescope (E-ELT), a monster scope with a 129-foot (39.3-meter) primary mirror. The instrument joins the ranks of other creatively named terrestrial scopes such as the Very Large Telescope, the Giant Magellan Telescope, and the Obscenely Colossal Telescope (full disclosure: one of these might be made up). 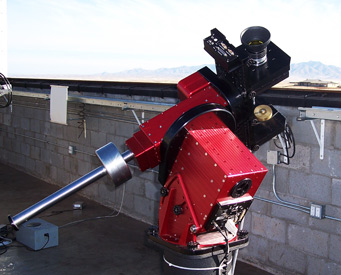 KELT-North searches the northern sky for exoplanet candidates. The scope recently made some big finds despite its small stature. Click for a larger view.

But big scopes don’t make all the discoveries. Scientists from The Ohio State University bucked the trend last week when they announced having spotted two exoplanets using the diminutive Kilodegree Extremely Little Telescope (KELT North) in southern Arizona. (Its twin, KELT South, is in South Africa.)

Astronomer Joshua Pepper (Vanderbilt University) built KELT North as part of his doctoral dissertation while at Ohio State. The scope sports a lens about as powerful as a high-end digital camera, says current OSU doctoral student Thomas Beatty, a member of the team behind the planetary find. The telescope, which cost less than $75,000 to build, performs automated, wide-field surveys of the northern sky. It takes in a 26°-square field of view through an off-the-shelf 80-mm, f/1.9 lens and CCD camera. The telescope itself could "almost fit in a shoebox" and reaches only chest height when sitting on its mount, says Beatty.

Pint-size though it may be, the planets it found are anything but. The more typical of the two, KELT-2A b, circles the primary star of the binary HD 42176 in the constellation Auriga, about 417 light-years distant. It's a third again larger than Jupiter and orbits every 4.1 days.

These days discovering such "hot Jupiters" is nothing special. But only a handful of them have been found around relatively bright stars — magnitude 8.8 in this case. KELT team member Scott Gaudi (Ohio State) says that KELT-2A is bright enough that it should shine clearly through the planet's atmosphere, allowing scientists to make direct observations of the exoplanet's cloud envelope. These observations will provide valuable data for scientists studying the atmospheres and interiors of hot Jupiters. 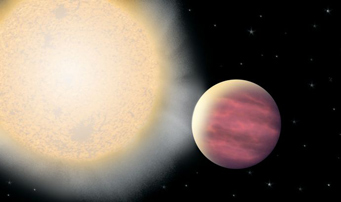 This artist's illustration of KELT-1b shows the superdense brown dwarf in its 29-hour orbit around the host star. The newly found object is unlike anything astronomers have ever seen.

The KELT team’s second discovery "resets the bar for weird," says Gaudi. KELT-1 b is 850 light-years from Earth, in the constellation Andromeda. It’s slightly larger than Jupiter but 27 times more massive, a superdense ball of metallic hydrogen just 2 million miles from its star and whipping through its "yearly" orbit in just 29 hours.

KELT-1 b gets bombarded with 6000 times the stellar radiation Earth receives from the Sun, resulting in surface temperatures likely above 4000°F (2200°C) — six times hotter than on Mercury’s sunny side. The planet is also "puffed up" beyond the size computer models predict.

Its makeup qualifies KELT-1 b as a brown dwarf, commonly known as a "failed star." Brown dwarfs lack the mass of hydrogen needed to sustain nuclear fusion; they’re simply cooling down after an initial gravitational collapse. This object is "unlike anything we’ve ever seen," says Gaudi. KELT-1 b is so massive and in such a tight orbit that it has gravitationally coerced the host star to rotate in lock step with its orbital motion. As noted in OSU’s press release, in a few billion years, KELT-1 b's star will expand and swallow the planet whole. KELT-1 b has the potential to "break open a whole new avenue of research comparing ‘normal’ brown dwarfs and hot Jupiters," adds Beatty.

The OSU team verified its find with the help of scientists at Harvard, Swarthmore, University of Louisville, and Las Cumbres Observatory in California, as well as additional photometry from amateurs Bruce Gary and Mark Manner. The team announced its results last week at the American Astronomical Society meeting in Anchorage, Alaska.

What other equipment did the KELT team use to discover the brown dwarf? A special camera? Spectroscope? I can't believe they found it just by looking through an 80mm refractor. (Or maybe they did?)

Good article. I had hoped to break the story on the OCT,see
http://mrscrivner.blogspot.com
for details.

Kelt-1 b is a growing list of finds in exoplanet studies that pose challenges to the conventional and evolutionary models to explain their origin. Other examples making the news now is the Kepler-36 system. Past reports like Kepler-10 b with its high density and very close orbit to its host star, Kepler-20 b-f system, and other examples like WASP-33 b that orbit retrograde. Such finds promise a rich field of study concerning planetary origins.

Roy: That is basically it. KELT is outfitted with an Apogee Instruments AP16E CCD camera, a red-pass filter, and a Paramount ME robotic mount. They also use a Mamiya 645 200mm lens for narrower-field viewing. The whole thing is controlled by a computer running Windows XP and some scripting software. It is almost completely automated, so the researchers can prepare a night's observing in advance and let the telescope gather imagery by itself; about once a month they swap out a hard drive and ship it to OSU to analyze the data. If you're interested in more details or technical specs you can read about KELT's hardware and software at http://arxiv.org/pdf/0704.0460v2.pdf.

Nice! If you can do this with an 80mm light thimble, as it were, imagine what could be done with an ordinary 8” scope. There isn’t anything in this setup that a well equipped amateurs couldn’t duplicate, is there? Paraphrasing Fiddler on the Roof: ‘If I were a rich man … all night long I’d scan for planets too, if I were a wealthy man.’

AS WITH ALL THE ABOVE WORDS NONE OF THEM HAVE ASKED ,WHERE IS THE PICTURE .THEY SAY THAT THEY HAVE FOND 2 extrasolar planets WITH THE TELESCOPE THATS CHEEP TO BULD ,RUNS AT NIGHT ON A ROOF POINTING UP.DON"T GET ME WRONG ,WELL DONE IT FINDING THE 2 BUT SOME OF US WANT PICS NOT WORDS SAYING WE FOUND THIS AND THAT.MOST OF US WHO LOOK UP AT THE NIGHT SKY LIKE TO SEE IT IN OUR EYES ,THEN AND ONLY THEN WE KNOW ITS REAL AND ITS UP THERE