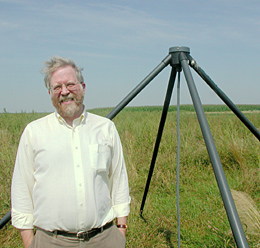 Harvey Butcher, director of ASTRON (Netherlands Foundation for Research in Astronomy), with one of the 15,000 all-sky antennas that will comprise LOFAR, the most powerful low-frequency radio telescope ever built.

Radio astronomers can't wait for their new toy. It's 350 kilometers across. It has no moving parts. It can be pointed in many different directions at once. It can even take snapshots of the whole sky almost continuously. And it's currently under construction in the rural northeastern part of the Netherlands. When completed in a few years, the Low Frequency Array, or LOFAR, will consist of some 15,000 small radio antennas linked by fiber optics to a new-generation supercomputer. The computer will process huge amounts of raw signals to observe distant galaxies and pre-galaxies, gas in the Milky Way, solar flares, cosmic rays, gamma-ray bursts, and much else.

Each cheap antenna — consisting of little more than four copper wires in protective PVC tubing — will pick up low-frequency radio waves (between 10 and 250 megahertz) from the entire sky. To "aim" the telescope toward the Crab Nebula, for example, the LOFAR software inserts the appropriate signal delay for each antenna, so that radio waves from the direction of the Crab arrive in phase and can be added interferometrically. "We have full control over our directional sensitivity," says Harvey R. Butcher of ASTRON, the Netherlands Foundation for Research in Astronomy. Just as easily, LOFAR can create moving blind spots to black out annoying sources of radio interference, such as airplanes or satellites passing overhead.

Various groups have developed the concept of a "software telescope" like LOFAR over the past years, including the SETI Institute with its Allen Telescope Array and a team at Ohio State University. The LOFAR plan is the work of ASTRON, the US Naval Research Laboratory, and the Massachusetts Institute of Technology’s Haystack Observatory.

Locations for LOFAR have been considered in Western Australia, the Netherlands, and the southwestern US. Although Western Australia was selected as the best site, the Dutch group decided to break off and build locally after receiving a government grant of 52 million euros tied to construction at the Dutch site. "We decided not to turn the grant down," says Butcher. "We have to match that grant from other sources, so it helps that our array also has applications in geophysics and precision agriculture." (The LOFAR fiber-optics network will be used for detailed tracking of crop growth along with soil moisture, minerals, and other parameters.) As another side benefit, the fiber-optics network will deliver the world’s fastest internet access to major parts of the Netherlands.

Right now, the LOFAR Initial Test Station consists of 60 inconspicuous antennas in a grassy field near the village of Exloo. Forty such stations will be built in the central 320-hectare (800-acre) area of the array, followed by 20 larger "remote" stations in a wider ring some 10 kilometers across. Finally, some 30 very remote stations will be built as much as 175 kilometers from the center (well into Germany), to add higher resolution. Butcher says LOFAR may continue to grow with additional antenna stations all over Europe. "It may never be finished."

Later this year, the Initial Test Station will be linked by a terabit fiber-optics connection to an IBM Blue Gene supercomputer at the University of Groningen. The first remote station is slated for late 2005. Astronomical observations will commence by the end of 2006, probably well before the baseline array is completed.

It works! This low-resolution radio image, spanning much of the sky, was synthesized by the first 60 LOFAR antennas. The large bright region is the Milky Way; some individual radio sources are identified.

A champagne ceremony last December 11th marked "first light" (or, more precisely, first interferometric fringes) for the Test Station. Ever since, it has acquired more detailed all-sky images. They show faint, large radio structures like the North Galactic Spur after just a few seconds of signal integration. Engineers think that scaling up the system from here will be no problem. "The technique turns out to work fine for a few dozen antennas," says ASTRON electronics engineer Yde J. Koopman, "so there’s no doubt it will work for 15,000." With more sensitivity and computer power, LOFAR may soon become the first telescope in the world to detect the enormously redshifted radio emission from clumps of neutral hydrogen in the Dark Age of the early universe, before the first stars and quasars began reionizing the primordial gas that emerged from the Big Bang.

However, despite the scientific potential of the new observatory, some radio astronomers are disappointed by the Dutch group's decision to build in the Netherlands. Colin J. Lonsdale (Haystack Observatory) says there are still plans to set up low-frequency radio arrays both in the US and in Australia, but "the loss of Dutch funding for the international project is damaging." According to Lonsdale, the Dutch LOFAR is smaller and less ideally situated than the original international project would have been. As a result, the other LOFAR partners decided not to participate in the Dutch project.

Butcher agrees that Western Australia would have been a better site for LOFAR, but he says there was little choice given the terms of the Dutch government's grant and the lack of solid financial commitment from the Australian government. "But we’re still closely cooperating with scientists at MIT," he says, "and we would certainly like to help realizing a Southern Hemisphere LOFAR in Australia." Farther in the future, Australia may become the site for the much-anticipated Square Kilometer Array (SKA), an even larger and more sensitive international radio-astronomy project that will work at higher frequencies.