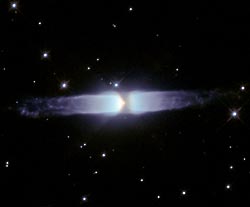 The planetary nebula Henize 3-401 in Carina seen by the Hubble Space Telescope. As in many planetaries, two opposite jets or plumes are emerging from the region of the central star.

In about 7 billion years, any distant spectators will see the dying Sun shrouding itself in a planetary nebula, right? It says so in every astronomy textbook. Well, maybe not. Orsola De Marco (American Museum of Natural History) says single stars may not be good at producing planetaries. Working with a team led by Howard E. Bond (Space Telescope Science Institute), De Marco has found evidence that most if not all central stars of planetary nebulae are binaries. The group's work appears in the February 1st Astrophysical Journal Letters.

Most planetary nebulae are not spherical but display paired lobes, jets, hourglass-shaped shells, or other bipolar (two-sided) forms. For a long time astronomers have suspected that orbiting companions cause this pattern of shapes, probably by spinning up the central star before it ejects the nebula. De Marco's observations support this view. Using the 3.5-meter WIYN telescope at Kitt Peak Observatory, she studied 11 central stars of planetary nebulae and found that 10 showed radial-velocity variations, probably due to the gravitational tug of an orbiting companion.

You don't need the Hubble Space Telescope to see that many planetaries have bipolar symmetry. Richard Jakiel sketched these three using his 20-inch reflector at powers of 170x to 360x through narrowband nebula filters. Other good examples can be seen in much smaller amateur telescopes. North is up.

Since the mid-1990s, Israeli astronomer Noam Soker (Technion, Haifa) has sought to explain planetary nebula shapes through a variety of binary scenarios involving companions ranging in mass from stars down to planets (Sky & Telescope: November 1997, page 20, and August 2001, page 23). "I think Soker had the fundamentally right ideas," says De Marco, "although I don’t agree with him in not trusting model calculations." Stellar-evolution models and hydrodynamic calculations indicate that you may need a companion star, not a planet, to spin up an old, bloated giant enough for it to produce jet-like outflows that would create a bipolar nebula — or even a visible planetary at all. Says Bond, "We could be at the start of a revolution in the study of the origin of planetary nebulae."

The group intends to study more central stars for signs of binarity — and also to determine orbital periods for the ones examined to date, to confirm that the radial-velocity variations are not due to some other cause.

The importance of bipolar winds in shaping planetary nebulae is evident from recent observations of extremely young protoplanetaries by Carmen Sánchez Contreras (Caltech) and her colleagues using the Keck II telescope at Mauna Kea, Hawaii. Their spectroscopic studies, presented at the January meeting of the American Astronomical Society, show that asymmetric winds from dying stars start to sculpt their circumstellar envelopes even before the envelope becomes visible as a planetary nebula.

So what about the future of the Sun? A single star will indeed lose most of its outer layers after its red-giant stage, but De Marco is not so sure that this will lead to a visible planetary nebula. If a giant is not spun up to rapid rotation, she says, the mass loss might remain slow and steady over a very long time, leading to a nebula that is rarefied and invisible. Moreover, due to the Sun’s small mass and slow evolution, the nebula may disperse altogether by the time the remaining central star becomes hot enough to ionize it and make it glow. According to De Marco, a binary companion may be necessary to produce energetic, episodic, and asymmetric mass loss. "A lot of single stars," she says, "may never produce a visible planetary."