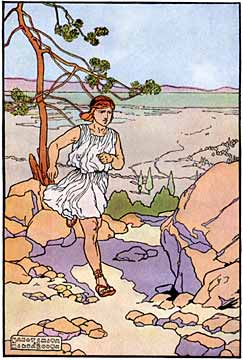 Herodotus refers to Pheidippides with the Greek word 'hemerodromos,' which means 'all-day runner' — suggesting that he was a professional messenger in top condition and not likely to die from running in ordinary conditions. This illustration comes from a book published in 1913.

One of the most famous runs in history took place in 490 BC, when a lone messenger raced some 26 miles from the battlefield at Marathon to Athens. He then collapsed and died, but not before blurting out news of the Greeks’ victory and warning of an impending attack by the Persian fleet on Athens itself (see the map below).

The tale has always been something of a puzzle for historians and sports enthusiasts alike. After all, why should a trained runner drop dead when thousands of modern-day marathoners complete their runs, exhausted but very much alive? However, new astronomical research by Donald W. Olson, Russell Doescher, and Marilynn S. Olson (Texas State University) appears to change the date usually quoted for the Battle of Marathon — and the finding gives an unusual twist to the heroic runner’s death. 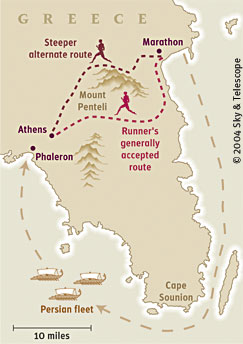 The events of 490 BC took place in the region of Greece called Attica. The Persians sailed from the site of their defeat at Marathon and around Cape Sounion in an attempt to land at Phaleron, the port of Athens. The route of the runner and the Athenian army between Marathon and Athens is not known. Most scholars advocate the path southeast of Mount Penteli, and this course will be used in the Athens 2004 Olympic Games. A few authors argue that the messenger in 490 BC might have used a shorter but steeper route passing through the hills northwest of Mount Penteli.

"The Greek historian Herodotus provides precise descriptions of the phase of the Moon near the time of the Battle of Marathon," Donald Olson notes. "These are the key to dating the battle and the Marathon run." The Athenians had made an urgent appeal to the town of Sparta, 150 miles away, for help in thwarting the Persian landing at Marathon. The Spartan army arrived on the scene one day late, Herodotus explained, delayed by a mandatory religious festival that ended in a full Moon.

But which full Moon?

Most modern scholars identify the festival that delayed the Spartans as the Karneia, and on this basis, September 12, 490 BC, has become the standard date for the Battle of Marathon. But it was derived using the well-documented calendar of the Athenians. "We suddenly realized that the Karneia was a Spartan festival," say the Texas researchers. "The calculation should be done in the Spartan calendar instead!" As they explain in the September Sky & Telescope, the sequence of new Moons following the previous fall equinox probably led the Spartans to celebrate the Karneia a month earlier in 490 BC than in most other years.

Moving the battle’s date up a month, to August 12th, has an important effect. The average afternoon temperature along the runner’s route in August is 88° to 91° Fahrenheit, with temperatures as high as 102° possible near Athens. Under such conditions, even a trained athlete can suffer heat exhaustion and fatal heat stroke.

On August 29th this year, in the final event of the Athens Summer Olympic Games, a field of runners will break from a starting line at Marathon and retrace the ancient route. To take advantage of cooler evening hours that race won’t start until 6 p.m. — a choice probably not available to another runner nearly 25 centuries ago. 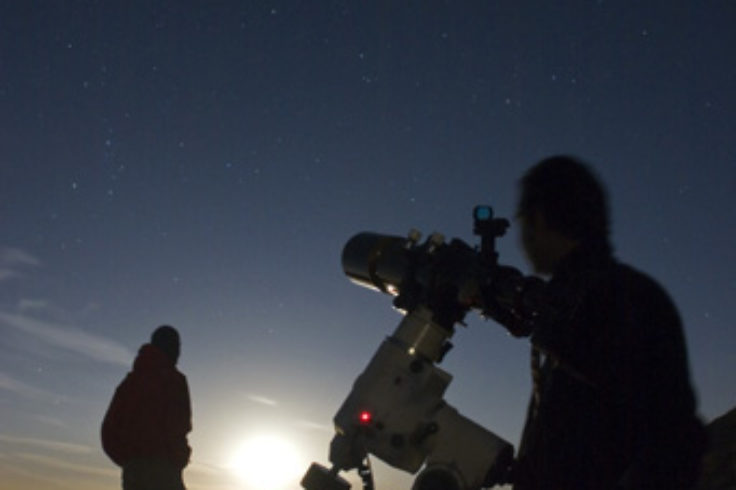