Mars Express celebrates a decade of orbital observations of the Red Planet. 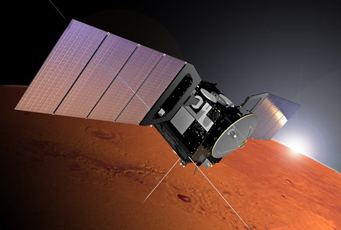 An artist's impression of the Mars Express orbiter.

On June 2, 2003, the European Space Agency’s (ESA) Mars Express orbiter was launched toward the red planet, entering into orbit just six months later. Though the accompanying Beagle 2 lander failed to establish radio contact from Mars’s surface, the orbiter is still swinging around Mars ten years on. Mars Express orbits roughly every 8 hours to collect data on Mars, its moons, and even the Sun.

Since the 1960s hard experience and lost missions have taught us that reaching Mars is supremely difficult. Overcoming the immense challenge of getting there made success even sweeter. Upon entry into Mars orbit on Christmas eve in 2003, ESA’s Spacecraft Operations Manager Michel Denis recalls “yelling, with my loudest voice, ‘We are at Maaaaaaaars!’”

But a successful orbital insertion only marked the beginning of the Mars challenge. A decade’s worth of successful operations and stunning scientific discoveries have required quiet determination, professional dedication, and intense teamwork, not only from ESA but also from partner agencies and industrial supporters. 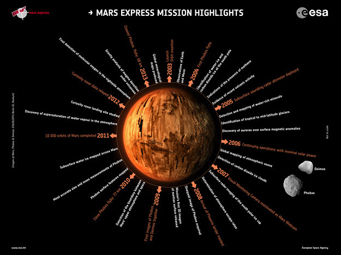 In 2005 the 20-meter Mars Advanced Radar for Subsurface and Ionosphere Sounding (MARSIS) experiment boom failed to lock into place, which engineers solved by allowing the Sun to warm up the joint. In 2006 an unusually demanding eclipse season required the operations team to design a special ultra-low-power mode. And in 2011 the mission enjoyed an unlikely return to full science after an on-board mass memory unit malfunctioned — that solution required immense software wizardry.

Overcoming these technical challenges has resulted in fantastic discoveries in the last ten years. Mars Express has monitored all regions of the Martian environment, from the subsurface to the upper atmosphere to its two tiny moons, Phobos and Deimos. It has provided an in-depth analysis of the Red Planet’s history and returned breath-taking images, many in 3D.

Mars Express has helped rewrite the story of water on Mars, finding minerals known to form only in the presence of water in the most ancient of terrains. In this early epoch of Mars history, the planet might have harboured conditions to support life, but for the next 3.5 billion years the planet turned dry and cold.

But water is still locked up in the planet’s ice caps. Ground-penetrating radar added a third dimension by determining the vertical extent of the polar ice: turns out there’s enough at the south pole that if it melted, it would cover the entire planet with a layer of water some 30 feet deep.

To celebrate its 10th-year anniversary, the Mars Express team released a mineralogical map of the Martian surface. Created by the OMEGA instrument, the map shows the presence of ferric oxide (rust) particles, which make up most of the dust on Mars's surface. Click image for larger versions.

One of the mission’s most intriguing results was the 2004 detection of a small amount of methane in the atmosphere, a result still heavily debated in the scientific community. Methane can only survive on Mars for a few hundred years before it oxidizes to form water and carbon dioxide, so its presence suggests that whatever is producing it is still active. Volcanoes are one possible source, and this would be the first sign of active volcanoes on Mars. Biological activity is another possibility.

The last ten years have provided us with a truly global perspective of Mars’s history, and there will be plenty more discoveries to come. Coordinating measurements with NASA’s MAVEN and ESA’s upcoming ExoMars missions, making the closest-ever flyby of Phobos, and watching as a comet makes a close pass to Mars, will provide unique operational challenges and observing opportunities.

With a bit of luck, the spacecraft will mark many more birthdays orbiting the Red Planet before it, like all missions, eventually ends. When that happens, there probably won’t be much yelling, but there will be a profound sense of a job well done amongst ESA's Mars Express teams.