If no one has asked you about it yet, they probably will. A bogus e-mail chain letter, sometimes titled "Mars Spectacular," has been circulating around the Internet, as it did last year. It claims that on August 27th the planet Mars will dazzle the world, appearing brighter than ever in history and "as large as the full Moon to the naked eye." 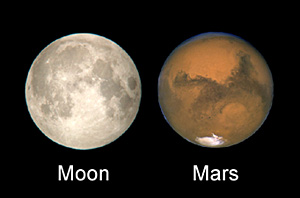 A bogus e-mail chain letter is misleading people into thinking that Mars will look as big as the full Moon to the naked eye in late August 2006. To learn the truth, see the image below.

The problem is that "August 27th" is actually August 27, 2003. Mars did make a historically close pass by Earth at that time, and when magnified 75 times in a telescope, it looked (in the telescope) the size the Moon looks to the unaided eye. But that qualifier has long been lost from some versions of the chain letter.

Ironically, in late August 2006 Mars cannot be seen at all; it's hidden behind the glare of the Sun. In any case, to the naked eye Mars always looks like a star, not the full Moon. 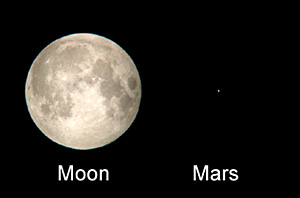 Even when Mars is at its closest and brightest, which it won't be again until late 2007, it looks like an orangish star, nowhere near as big and bright as the full Moon.

In late August 2003 Mars came within 35 million miles of Earth, and in late October and early November 2005 it came within 43 million miles. Mars's next opposition will come in December 2007, when it will be farther still, 55 million miles from Earth. For reference, the Moon orbits the Earth at an average distance of about 240,000 miles, and the average Earth–Sun distance is about 93 million miles.

The Mars chain letter seems destined to get revived every August. I don't see this as a bad thing, I see it as a good thing. It's an immunization. If you make a fool of yourself by sending it to all your friends and family, you'll be less likely to send them the next e-mail chain letter you get, which may not be so harmless.