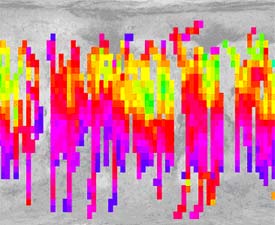 Mars Express's Planetary Fourier Spectrometer (PFS)mapped the distribution of water vapor in Mars's thin atmosphere. Water is distributed uniformly at high altitudes, but at low altitudes it is concentrated in three equatorial regions: Arabia Terra, Elysium Planum, and Arcadia-Memnonia. Highest water concentrations are in green; the least are in purple. Other PFS measurements show that methane is concentrated in the same areas.

Last week the European Space Agency reported new results from Mars Express that bolster the hope that small colonies of microbes may be eking out an existence under the Martian surface today. Atmospheric data from the orbiter's Planetary Fourier Spectrometer show that water vapor and methane show up together above three equatorial regions that overlie subsurface ice — suggesting a common underground origin. Methane is considered a possible biomarker. It breaks down rapidly in Mars's atmosphere, so it's presence is intriguing. Some source — biological or geological — must constantly replenish the gas.

"Either way, it's an exciting finding, but I'd like to see the data," says Michael J. Mumma (NASA/Goddard Space Flight Center), whose team first detected Martian methane in 2003. Mumma points out that ESA's spectrum shows only one line attributed to methane and that characterization could have been a mistake. The line could be due to water vapor or some other compound.

If the methane result is confirmed, it could conceivably be the signature of ongoing biological activity. As Mumma says, "If the methane is from biology, you would expect water vapor to be released too." But methane gas could also result from geothermal activity or the slow release of methane molecules that have been trapped for eons in underground water ice. "Geothermal activity would have to be occurring at least 1 kilometer below the surface to have avoided detection," says Mumma, who adds that future detections of other gases might help resolve the methane mystery.

"If the spatial correlation between water and methane holds up, then it is a development that would seem to increase the chances of extant life, at least slightly," adds planetary scientist David H. Grinspoon (Southwest Research Institute). But he cautions, "The only living planet we know of is marked by flagrant violations of atmospheric equilibrium, and is overrun with life. I'm not sure that a biosphere that is 'slightly alive' can be stable over billions of years. I suspect not, just as a person cannot be 'barely alive' for long."

Meanwhile, Mars Express has also measured about 1 kilogram (2.2 pounds) of gas escaping per second from Mars's thin atmosphere. These results help explain how Mars has lost liquid water over billions of years as its atmosphere was bombarded by the solar wind. 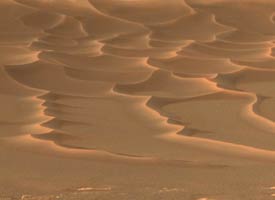 Opportunity images sand dunes at the bottom of Endurance Crater. The rover will probably leave the crater in mid October.

Down below on the Martian surface, NASA's rovers Spirit and Opportunity are engaging in routine science operations. Spirit is heading to the summit of Husband Hill (named after the commander of the ill-fated Columbia mission, Rick D. Husband), while Opportunity will soon leave Endurance Crater, perhaps in mid October, to visit its heat shield.