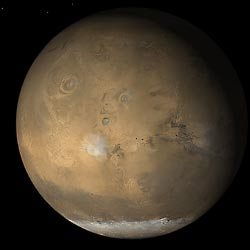 The red planet as seen by Mars Global Surveyor in June 2001. Amateurs observed flares on Mars's surface three days before this image was taken. Those flashes are now thought to be caused by water ice reflections.

Initial data from Mars Odyssey's neutron spectrometer — designed, among other things, to detect signs of water on or near the surface of Mars — adds support to the idea that enigmatic flashes on Mars seen through Earth-based telescopes are reflections from low-lying clouds of ice crystals or even patches of surface ice.

The flashes, as reported in Sky & Telescope by Thomas Dobbins and William Sheehan (May 2001, page 115), were first seen in 1894 at Lowell Observatory. They were observed again in 1951 and '54 by Japanese amateur Tsuneo Saheki, and by other observers in '54 and '58. They were "rediscovered" in 2001 by a team of S&T observers in Florida (September 2001, page 112). Dobbins and Sheehan showed that all these sightings corresponded to times when the affected regions of Mars — Edom Promontorium and Tithonius Lacus — were in exactly the right geometry to produce specular reflections, like those produced by a sheet of ice or a dense cloud of plate-like ice crystals. At these spots, one could expect to see a glint of sunlight, like the Sun being reflected from a distant building's windows as sunset approaches. The ice spots have to be located halfway between the sub-Sun point (where the Sun is directly overhead on Mars), and the sub-Earth point.

The same geometry for the Edom Promontorium region was repeated in June of last year, and a team of observers saw, and captured on video, a series of flashes there — in a region that corresponds to the large, flat crater Schiaparelli. Analysis of the timing and intensity of the flashes led the observers to conclude that they were most likely reflections from ice on inclined surfaces, such as the faces of a dune field.

The first results from Mars Odyssey's neutron spectrometer were released in March, showing areas rich in hydrogen and thus likely to contain water ice (or possibly hydrated minerals). As expected, most was concentrated in the region of the south pole. But there was also a small patch right at the equator — in just the area where the flashes were seen.

Neither observation proves there is ice on the surface, though Mars Global Surveyor images have shown patches of surface frost in the area. The area is also known for morning fogs, as is the canyon region where other flashes have been seen, so low-lying cirrus-like clouds could also be producing the reflections. Either would be consistent with the high water concentrations implied by the neutron data.

The possible correlation is "very intriguing," says William Feldman of Los Alamos National Laboratory, principal investigator for the neutron spectrometer. More details from the first months of observation, including a more detailed map of the hydrogen concentrations, will be released at a NASA press conference on May 30th, he says.