Scientific discoveries are often accidents. On Mars it's no different — NASA's Mars Exploration Rover Spirit made its latest discovery because of a limp. A year ago, while dragging along a broken wheel, the rover unearthed soil and rock deposits of opal-like silica that suggest the presence of hot-spring volcanic eruptions in the planet's early history. 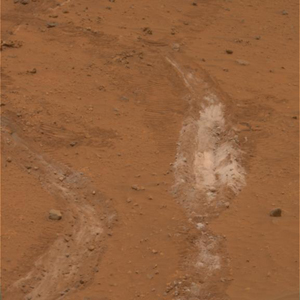 Spirit's right front wheel stopped turning back in early 2006. Rejecting defeat, mission scientists found an unusual solution to their problem: they drive the rover backwards using the five functioning wheels. While awkward, going backwards keeps Spirit rolling. It's slow going, though, and the rover leaves a prominent trench dug out by the lame wheel as its wake.

"The first discovery of this silica was some stuff that popped up in some soil in the floor of that trench," said MER principal investigator, Steve Squyres, in a prepared statement. "We wouldn't have seen it if it hadn't been for the dead wheel."

The kind of silica that the team found on Mars (both in the trench's soil and in rocks peppering Spirit's neighborhood) matches what appears on Earth in hydrothermal systems. That means that the silica required lots of hot water to form. Scientists already know of past Martian volcanic activity (possibly even steam volcanism) at Home Plate, the flat plain in the Columbia Hills where Spirit roves.

Depending on a given environment's acidity, silica can form either due to hot springs or steam vents, says Squyres.

"What happens in hot-spring environments on Earth is that hot water will circulate beneath the surface, where it will dissolve silica out of the rocks," says Squyres. "It's hot, it is buoyant, it rises to the surface. As it rises it cools." In cooling, the silica condenses from the water into deposits.

The other possibility, Squyres notes, which occurs in highly acidic environments, is that the silica was highly insoluble and the "caustic vapors" ate away at everything but the silica.

Water on Mars isn't news. Satellite images show evidence for water and ice both on and under the Martian surface. But the silica deposits excite the Spirit team because in terrestrial hydrothermal systems — like Yellowstone National Park — geothermal vents often host microbial life. And when life no longer thrives, silica provides excellent storage for fossils. It's "sort of like bugs in amber," said Squyres.

More Mars news is imminent. Phoenix, the next Martian lander, is scheduled to touch down on the Red Planet on the 25th. Sky & Telescope's executive editor Kelly Beatty will be waiting with the mission scientists as they listen for Phoenix's first signals from the surface.

The rover research appears in today's issue of Science.

The planet Mars keeps us wondering about its past. Perhaps the Phoenix lander will uncover even more surprises.