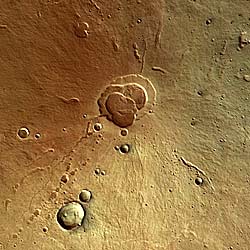 Mars Express’s High Resolution Stereo Camera returned this image of Hecates Tholus’s summit caldera. Volcanoes like this might be responsible for pumping trace amounts of methane into Mars’s atmosphere.

Three independent teams have detected the spectral fingerprint of methane (CH4) in Mars's thin atmosphere. The methane accounts for only about ten out of every billion molecules, but even that trace of an amount is significant because some unknown process must continually replenish the gas. Methane reacts with atmospheric hydroxyl (OH) ions to form water and carbon dioxide, so if it were not resupplied, the gas would vanish within a few hundred years.

Scientists have proposed numerous processes that could pump methane into the atmosphere, the most obvious being volcanic or geothermal activity. Various orbiting spacecraft, however, have seen no evidence that such activity has taken place in recent times. A tantalizing but less likely possibility is that subsurface microbes are exhaling methane. On Earth, bacteria, animals, and decaying organic matter belch methane into the air, accounting for almost the entire atmospheric content.

The first methane detection was reported last September by a team led by Michael J. Mumma (NASA/Goddard Space Flight Center). Mumma's group found methane in observations from NASA's Infrared Telescope Facility in Hawaii and the 8.1-meter Gemini South telescope in Chile. Since then Mumma acquired new observations confirming the earlier detection, including the fact that methane concentrations are highest near Mars's equator. Interestingly, in some measurements the methane abundance is highest in the Meridiani region, where the rover Opportunity has found evidence for past standing bodies of liquid water.

In late March, team members from the European Space Agency's Mars Express orbiter reported a methane detection as well. A third group, led by Vladimir A. Krasnopolsky (Catholic University of America), used the 3.6-meter Canada-France-Hawaii Telescope to find methane and will report its results at a conference later this month.

"Now that we seem to be detecting methane, this will stimulate the entire community to think about how it is replenished," says Mumma. First, scientists can look for source regions to find clues. Second, future orbiters and landers could measure the isotopic ratio of carbon-12 to carbon-13 in methane. Terrestrial organisms preferentially use carbon-12, so if the carbon bound in atmospheric methane has a slight excess of this lighter isotope, it would suggest Martian critters are involved. The British-built Beagle 2 lander carried a mass spectrometer that could have measured this ratio. "It's a real pity the mission failed," says Mumma 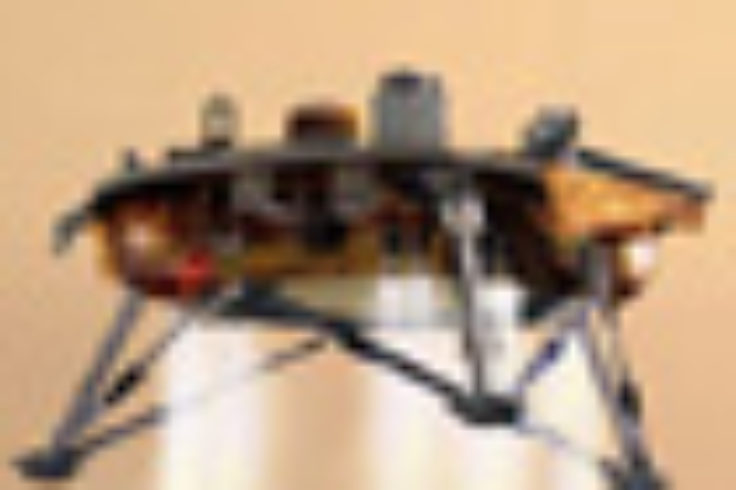 (Drops of) Water on Mars?

Cosmic Collisions Is a Smash Hit