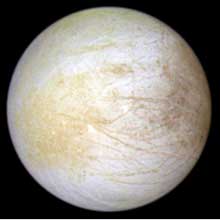 Researchers have learned of a bacteria that thrives without sunlight or organic material. Such an organism might be found within the hidden ocean of Europa (seen here in a Galileo image).

The discovery of a unique population of microbes deep within the Earth has bolstered the plausibility that life exists elsewhere within our solar system. The microbes, reported in the January 17th issue of the journal Nature confirm that life can exist with neither sunlight nor any influx of organic materials.

Frank Chapelle (U.S. Geological Survey) and Derek Lovley (University of Massachusetts, Amherst), discovered an ecosystem almost completely dominated by methanogenic archaea, an ancient form of bacteria that use hydrogen released by geothermal activity as an energy source. The community, located approximately 200 meters underground in Idaho, feeds exclusively off the hydrogen from a hot spring. There is no sunlight available for photosynthesis, and no carbon-based food sources.

The water from the hot spring bubbles through a layer of volcanic ash laid down 4 million years ago during an eruption of Mount Kilgore, at the southern tip of the Beaverhead Mountain range. The ash was heated to 800°-900° Celsius by the eruption, vaporizing all organic carbon and leaving "volcanic tuff" devoid of organic material. The lack of available organic material is what sets this microbial community apart from others.

Almost every ecosystem on Earth receives some input from the Sun, either directly by photosynthesis or indirectly from organic material generated by photosynthetic organisms. Archea are present in the communities that surround deep ocean vents, but they are out-competed by more efficient bacteria that live on an input of organic material. "Most natural microbial communities reflect this photosynthetic bias," said Chapelle. But the lack of sunlight and organic material around the hot spring allows the archaea to dominate. "If you think about it, these conditions would be an awful lot more 'normal' throughout the solar system."

Ecosystems that do not require sunlight give researchers hope that life could exist on Europa or under the Martian surface. If Europa does turn out to have a liquid ocean under miles of icy crust, a community of archaea-like organisms could exist, provided that some form of geothermal activity was present under the ice. With just hydrogen, water, and CO2, archaea can thrive.

Astronomers selecting candidate sites with these ecosystems in mind would simply have to look for a source of hydrogen along with water. "Where that hydrogen comes from doesn't matter to the microorganisms," said Chapelle.