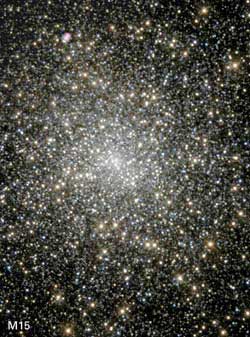 The globular cluster M15, imaged by the Hubble Space Telescope. Stars at its core are orbiting a tiny dark object that has 4,000 times the mass of the Sun.

Astronomers have long known about two different categories of black holes. Small ones (with only a few times the mass of the Sun) result from the collapse of an aging giant star's core. "Supermassive" holes (having millions or even a few billion solar masses) sit at the centers of most galaxies; these apparently form in concert with the processes that shape a galaxy's central bulge. Recently X-ray astronomers have turned up hints of "intermediate-mass" black holes having a few hundred to a few thousand times the Sun's mass, but how these might get created is not at all clear.

A team of astronomers led by Roeland Van Der Marel (Space Telescope Science Institute) used the Hubble telescope to measure the velocities of stars very close to the center of the globular cluster M15 in Pegasus. Hubble's high resolution allowed it to take stellar spectra closer to the cluster's center than can be done by telescopes on the ground. Van Der Marel's collaborator Joris Gerssen determined that the pattern of velocities indicates a tiny dark mass equivalent to 4,000 Suns at the cluster's core. A black hole is the only plausible explanation.

Another team used the same method with Hubble to find a 20,000-solar-mass black hole in the globular cluster G1 orbiting the Andromeda Galaxy. G1 is the most massive globular known, containing about 10 million solar masses in all.

There's an intriguing pattern here. In the last few years astronomers have realized that giant, galaxy-core black holes follow a clear trend. Each contains roughly 0.5 percent as much mass as its galaxy's central bulge (the galaxy's spherical or elliptical concentration of old, yellow, "Population II" stars). Globular clusters are also balls of Population II stars, though much smaller. The same bulge-to-hole mass ratio, extended all the way down to the masses of globular clusters, fits the two new discoveries fairly well. Apparently the rule spans a range of objects that differ in mass by nearly a million times. 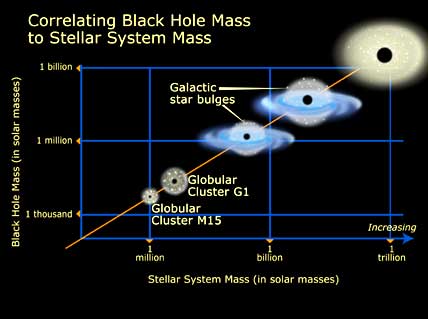 If the law really does hold true across the whole range — that is, if the holes in M15 and G1 aren't just flukes — it must be telling something about how all assemblages of old stars formed in the early ages of the universe. Many globular clusters are believed to have formed just before galaxies did and later got incorporated into them. Perhaps the midsize holes in globulars were seeds that grew into giant holes after they made their way to a galaxy's center.