This week Robert Naeye, S&T's editor in chief, is dashing around the American Astronomical Society convention in Long Beach, California. Here the nation's professional astronomers are sharing their research results, projects, plans, and hopes. Buckets of astronomy news always come out at these meetings. Bob will be blogging about these announcements during the next few days. Here's his first report. Stay tuned! 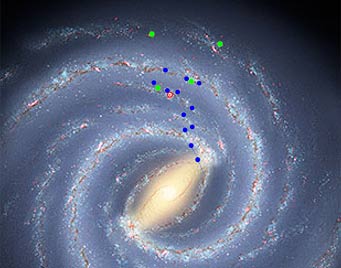 On this map of the four-armed Milky Way, the red dot marks the location of the Sun. The green and dark blue dots show the locations of radio masers measured in the newly-announced study.

I heard a lot of interesting results on Monday at the American Astronomical Society’s annual winter meeting. But three really caught my attention. The first concerns the Milky Way, and it looks like some textbooks are going to have to be revised.

An international team led by Mark Reid (Harvard-Smithsonian Center for Astrophysics) presented the most direct measurements yet of the rotation rate of our Milky Way Galaxy. Using a network of 10 radio telescopes stretching from Hawaii to New England known as the Very Long Baseline Array (VLBA), the group was able to measure the extremely precise parallaxes (distances) of pointlike radio sources in 18 of the Milky Way's major star-forming regions. The study revealed a total of four spiral arms, all of which contain young stars, and two of which consist of both young and old stars.

We reported on that a while ago. But there's more. The team has been able to map not just the distances of the radio sources, but their complete motions in three dimensions — by combining their sideways movement on the sky (proper motion) and movement toward or away from us (radial velocity). The result provides a map of the galaxy and its rotation directly from geometry, free from most astronomical assumptions.

The team finds that the galaxy's rotation rate is 270 kilometers per second (600,000 miles per hour). This is 15 percent faster than previously thought. And that in turn means the Milky Way is more massive than previously believed. In fact, it puts our galaxy on equal footing with our nearest large neighbor, the Andromeda Galaxy (M31).

Because Andromeda has more stars than the Milky Way, astronomers have generally assumed that it was about 50 percent more massive. But this new result agrees with a study published two years ago by Mark Wilkinson (Cambridge University, England) and his colleagues. By studying the motions of satellite dwarf galaxies and globular clusters, they found that the Milky Way is at least as massive, and maybe more so, than Andromeda.

“We should no longer think of the Milky Way as the little sister of the Local Group of galaxies,” says Reid. “The two galaxies are basically fraternal twins — equal in mass.”

Does this mean the Milky Way is richer in dark matter?

Reid also noted that the Sun takes about 225 million years to orbit the center of the galaxy, meaning that the last time the Sun was in its current position, dinosaurs were just starting to roam the Earth.

For more information, here's a press release from the National Radio Astronomy Observatory. And here's a paper about the distance measurements by members of the group.

So what happens to the Sun's LSR measurement (Local Standard of Rest)? Is it still considered the semimajor axis = 8 kpc or 8.5 kpc, e = 0.06 and mean orbital velocity 220 km ^-1? The implication in this report, the Sun's parameters for LSR could change and have a shorter period of rotation in the Milky Way (i.e. < 225 million years). This also raises a question. How can we test to show the Sun has completed multiple rotations in the Milky Way since its origin (perhaps as many as 19-21)?

What impact might the revised speed have in terms of other calculations? While it is not anywhere near the speed of light, C, that it's faster might influence other speed, distance, or time calculations. Or is it negligible?

The referecce that racial velocity is 270 KPS confuses me. Is not MPH or KPS a linear velocity? Is the "rotational velocity measured at the radial position of the sun. Is the radial velocity constant with radius or is it a variable?

From the Press Release
"Our Solar System is about 28,000 light-years from the Milky Way's center. At that distance, the new observations indicate, we're moving at about 600,000 miles per hour in our Galactic orbit, up from the previous estimate of 500,000 miles per hour."
It's the velocity at our radius.
About 200,000,000 for one rotation

If the Milky Way is twice as massive as preivously thought, and it's our own galaxy, in all probability couldn't other galaxy's be more massive as well? And if so, is all that missing mass enough to keep the universe from expanding forever? This could change everything we know.

I too am intrigued by the possibilities these latest findings suggest. If the Milky Way is really so massive, could not our estimate of the mass of other galaxies also be flawed? I understand that we are inside looking out and this bobbles our efforts to understand our own home galaxy. Just as trying to count the trees of a forest from a specific point within renders it a near impossible task. Still I must wonder what this could imply where the mass of other galaxies is concerned.

Seems to me that every year we find more baryonic matter than was previously estimated. I too am left wondering about the true mass within our universe and about the theories concerning it's continued expansion. I have long believed that the expansion will eventually run it's course and the universe fall back in on itself. Just my belief.