New compositional map of the main asteroid belt shows that minor planets are not strongly grouped by composition, as had been thought, but instead are mixed up.

As little as 10 years ago, scientists supported the concept of an ordered and tidy model of solar-system formation. In it, there was a smooth compositional gradient across the asteroidal region between Mars and Jupiter. Asteroids orbiting closer to the Sun usually had a make-up distinct from others farther out. 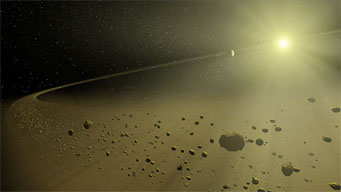 If recent computer simulations are correct, the Sun's innermost planets assembled from a narrow disk of rocky rubble that was only about 30 million miles wide. Such a tightly confined disk yields a Mars that's not too big — a failing of previous modeling.

So when astronomers found unexpected types of space rocks out of their predicted zone, they classified them as “rogues” — not something leading the dramatic life of a duplicitous secret agent, but instead something found where it isn’t expected to be. Thinking of these as exceptions worked until recently, when the number of rogues increased beyond the predictions of traditional models. Now, new research by Francesca DeMeo (MIT) and Benoit Carry (Paris Observatory) suggests rogues are the rule, not the exception.

The two researchers compiled a map of more than 100,000 asteroids using data from the Sloan Digital Sky Survey . Analyzing bodies ranging from 5 to 1,000 km in diameter and categorizing them by size, location, and composition, DeMeo and Carry found the so-called rogue asteroids throughout the main-belt region. This means the belt is a mix of asteroids, not a steady gradient, with different types of small bodies residing between Mars and Jupiter.

This plot shows the compositional mass distribution of the asteroid belt out to the Trojans. Gray areas show total mass within each region and the colored lines represent asteroidal classification. The colors are all mixed together, revealing that the asteroid belt is a well-blended collection of asteroid types.

For example, asteroids with dark, carbon-rich surfaces, compositionally similar to objects in the distant Kuiper Belt or Jupiter’s Trojans, are found throughout the main belt. Also found there are asteroids that are remnants of the crusts and mantles of larger precursor objects.

In terms the evolutionary past of our solar system, the well-mixed asteroid belt we find today supports a planetary-migration model, in which the giant planets’ orbits changed dramatically over time in reaction to the gravity of nearby dust, gas, or planetesimals. This model only came about in the past decade, during which we've gone from envisioning static formation and evolution to a radical migration model.

The current consensus about how the solar system formed is a combination of the Nice Model and the Grand Tack model. These theories posit that Jupiter initially wandered as close to the Sun as Mars’s current orbit (with Saturn trailing behind) before heading outward to its near-final orbit. That dramatic movement swept out the asteroidal region between 2 and 4 a.u., scattering about 15% of the space rocks into deeper space. Then Jupiter crept in a bit and Saturn slid farther out, the two planets mixing up the asteroids via orbital resonances before heading to the neighborhood where they reside today.

“It’s like Jupiter bowled a strike through the asteroid belt,” comments DeMeo in an MIT press release.

This back-and-forth migration happened within the first billion of our solar system’s 4.5-billion-year history. It also explains the current placement of water-poor, heated asteroids and water-rich, primitive asteroids ending up near each other in the main belt, as revealed by the new map. This mixing of asteroid types gives more support for planetary migration and furthers our understanding of the solar system’s active, and rather unexpected, past.

These findings can also help with questions beyond our own corner of the Milky Way. Knowing more about solar system evolution helps us understand the same properties as they work around other stars. Planetary systems around other stars are varied and alien, with some systems hosting exoplanets nearly hugging their star or planets orbiting binaries. To understand the dynamics at work in those extreme environments, we need to understand how our own system formed and what makes our evolution different from those strange systems.

What does this model say about WHY Jupiter (and Saturn, etc.) began to migrate outward, then inward again? Is this also due to resonance? How can this be understood from the viewpoint of dynamics?

Thanks for this interesting report. The more we learn about our solar system, the more interesting, complicated, and dynamic it becomes. I knew about the Nice model, but this is the first time I've heard about the Grand Tack model. Is that "tack" as in sailing, so Jupiter and Saturn tacked "upwind" toward the Sun and then sailed out toward their current orbits? By the way, it would be nice to have a larger, higher-resolution image of the asteroid belt's compositional mass distribution.

Nice comments, Mike & Anthony. WHY is the right question Mike. As a scientifically inclined kid growing up in a religious household, I have long suspected that there would be scientific reasons why the existence of all the other planets in our solar system were needed for the Earth to be, not just as habitable, but as hospitable as it is. As to why planets can migrate remember conservation of momentum and that for every action there is an equal and opposite reaction. Thus if a small planetesimal has a near miss with a planet and the small body gets tossed outward, the planet will lose an equal amount of momentum and move inward. OTOH if the close encounter shoves the smaller body inward, the planet will move outward. (This is also the “gravitational assist” principle behind sending a space probe on a planetary flyby to move it into a different part of the solar system.) So if most of a planet’s encounters toss things out it moves in, and vise versa.

Anthony, I agree, and I tried to find out more about this “Grand Tack model”, but it has no English entry yet in Wikipedia. There is material in the French version, however, although after translation to English there isn’t much there either. I was able to find this however: http://www.nasa.gov/topics/features/young-jupiter.html
Surprisingly however this article is a poorly translated unedited English version of a French article, (everywhere Mars is mentioned the word “March” is used) and there’s no references to any papers, but Kevin Walsh of Boulder Colorado’s Southwest Research Institute is named as the Model’s “first author” and mention is made of the work being reported “in a Nature paper posted on June 5, 2011.” Here’s an exact quote, explaining why it’s called Grand Tack: “The Researchers Have you Developed this model of the early solar system call it the “Grand Tack,” a reference to the sailing maneuver.”

Thanks for the research and references, Bruce. Tacking upwind is one of the most magical things about sailing. An abstract understanding of force vectors doesn't capture the wonder of sailing into the wind. The person who first figured out how to do that must have been pretty popular with their sailor buddies.

Given the ice-ages that have wracked the planet for the last few million years, it may come as a surprise, but the sun’s habitable zone is slowly expanding outward. Eventually, it will be necessary to move the Earth farther from the sun to maintain its habitability. Hopefully, computer simulations will be able to accomplish this, as they have for Jupiter 😉

Could you reduce the size of the print for printing articles out? Thanks

Moving the Earth to adjust for the slowly warming Sun and an outwardly expanding habitable zone has already been worked into the design Peter. The Sun constantly looses mass due to both conversion of mass to energy in the core and from the solar wind blowing mass off its chromosphere. So planetary orbits will automatically expand, again due to conservation of momentum, lengthening the time the Earth stays in the Sun’s temperate sweet spot. The Earth was formed for long term inhabitability. (See Isaiah 45:18 and Psalms 37:29)

Bruce is incorrect in his statement that the slight decrease in the Sun's mass will offset the significant increase in the Sun's luminosity over the course of the next billion odd years, biblical verses notwithstanding. It just doesn't add up. It's true that the Sun's mass is decreasing and this will very slightly increase the mean orbital distances of the planets, but the rate is not enough to cancel out the increase in the Sun's luminosity. Current estimates indicate that the Earth will be uninhabitable thanks to increasing solar luminosity in one or perhaps two billion years (note that this is long before the Sun becomes a red giant). But the Earth's biosphere can survive. The key is to avoid reaching the point where the oceans evaporate at a runaway rate. Once this occurs, the Earth becomes permanently uninhabitable. There have been a number of clever studies looking at orbital tricks that some long-lasting and moderately advanced civilization might use to move the Earth outward to keep pace with the Sun's increasing luminosity. Here's one such study: http://www.weatheranswer.com/public/move_the_Earth.pdf but there have been others. Note that the process described here is probably only a few centuries beyond our current technology. So PRESUMING that there is a billion-year civilization of some sort (a mighty big "if"!) then there are certainly technological means for moving the Earth outward and keeping its climate approximately as it is now. Why we would do that is another question. Perhaps by then nostalgia for "good old Earth" will demand is preservation. Or maybe it will be done to preserve beachfront property values... (reminder: this is all hundreds of MILLIONS of years in the future --fun for conversation, but really just fantasy).

I don’t dispute Frank’s math, since I know he’s good at it, and since I’d already crunched the numbers myself. Note that I didn’t say by how long habitability would be extended as an effect of the reduction in the Sun’s mass, just that it would be lengthened. I do believe though that the duration of Earth’s inhabitability will be lengthened significantly over scientific predictions, and the fact that people with limited knowledge and power have already figured out how this might be accomplished even without divine intervention does nothing to diminish my confidence.

I'm worried about human-caused global warming and climate change, because we're killing other species right now and threatening human survival, and because we can do something about it. If we survive this crisis, future generations can grapple with the long-term consequences of the Sun's stellar evolution.