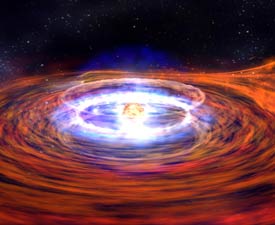 In this artist's image, dust is shown falling onto a neutron star.

A team of astronomers announced Monday compelling new evidence that black holes exist in nature, and are not just the concoction of theorists and science-fiction writers with overactive imaginations.

The team, led by Ron Remillard (MIT), studied 31 binary systems thought to harbor either a black hole or a neutron star. All of these systems are known as X-ray binaries because gas from a stellar companion streams onto its compact partner. As the material spirals inward at increasing speeds, it heats up and emits torrents of X-rays.

But Remillard's study showed a critical difference between the 18 systems thought to harbor black holes, and the 13 suspected to contain neutron stars. In every neutron-star binary, the team detected powerful, sporadic bursts of X-rays in archival data taken with NASA's Rossi X-ray Timing Explorer satellite. None of the black-hole binaries displayed such bursts.

This observation falls in line with theoretical expectations. In binary systems with neutron stars, as gas flows from the companion to the neutron star, it builds up on the neutron star's hard surface until it heats past a threshold temperature. Then the material ignites in a powerful thermonuclear blast, generating an X-ray burst that for about a minute emits hundreds of thousands of times more energy than the Sun.

In stark contrast, material falling into a black hole passes through an event horizon — "a point of no return" inside of which nothing (not even light) can escape. From our perspective as distant observers, the material vanishes from our universe without a trace. There is no hard surface where material can build up to produce X-ray bursts. The existence of an event horizon (a prediction of Einstein's general theory of relativity) distinguishes black holes from all other classes of astronomical objects.

All in all, the team found a total of 135 X-ray bursts in the neutron-star systems, and zero in the black-hole binaries. "We don't characterize our result as proof that something has an event horizon," said Remillard at the American Astronomical Society conference in Washington, DC. "But the bursts appear to distinguish objects with surfaces from those having event horizons."

While very few astronomers doubt the existence of black holes, this latest result adds one more impressive piece to the growing body of evidence that black holes are for real. "None of these studies on its own gives strong proof that black holes exist," says astrophysicist Kimberly Weaver (NASA/Goddard Space Flight Center), who was not a member of Remillard's team. "But when you add them together and get a consistent answer, you get the sense that you're getting somewhere."