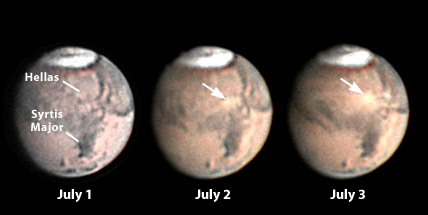 This three-panel image of Mars shows how the dust storm (arrowed) between Syrtis Major and the Hellas impact basin has grown in size and brightness. These images were taken by Donald C. Parker with his 16-inch Newtonian reflector in Coral Gables, Florida. South is up.

To quote the baseball great Yogi Berra, "It's déjà vu all over again." This summer Mars will be the brightest it will ever be in our lifetimes. But just as in 2001, the last time Mars was bright in the sky, a global dust storm threatens to block out all observable surface features.

Veteran Mars observer Donald C. Parker reports that significant changes have taken place on Mars in the last 72 hours. On Wednesday, Parker said, "I'd call it a dust cloud, not a dust storm." But after looking at images from this morning, his outlook was far more bleak.

By early yesterday morning, July 2nd, it was clear that something major was taking place. Parker noted that the isolated clouds he'd seen over Iapygia the night before had coalesced and expanded to form one cloud, bright when viewed in red light. The coalescing cloud is on the side of the planet that can currently be studied most easily from the Americas. It is centered at Martian latitude 25° south, longitude 294° west.

This morning Parker noted that the "cloud" had doubled in size and appeared to be a bona fide storm. "It's extremely bright," remarks Parker, and "it looks like the dust has spread in the past 24 hours." The storm has grown such that it is now covering part of the Hellas basin and has extended east into Mare Tyrrhenum.

In 2001 the Hubble Space Telescope captured a dramatic change in Mars's weather. When HST imaged Mars in June (right), the seeds of the storm were caught brewing in the giant Hellas Basin (oval at 10–11 o'clock position on disk). When Hubble photographed Mars in early September (left), the storm had already been raging across the planet for nearly two months obscuring all surface features. South is up.

"It's scary. This is almost a repeat of what happened in 2001," adds Parker. "But with Mars, who knows? Maybe we'll get lucky and it will just go away. We should know in a day or two."

Parker credits Beish, former Mars recorder for the Association of Lunar and Planetary Observers, with having predicted this localized event almost to the day. In Beish's view the dust cloud is unlikely to become widespread. Rather, it may be the precursor of a global dust storm that Beish feels is a distinct possibility for September.

Sky & Telescope's guide to this year's Mars apparition appeared in our June 2003 issue. An abridged version is available online. To find out which side of Mars is visible at any particular date and time, see our handy Mars Profiler JavaScript utility.