Scientists crunching data from the January and October 2008 Messenger flybys of Mercury have just announced a flurry of new results. 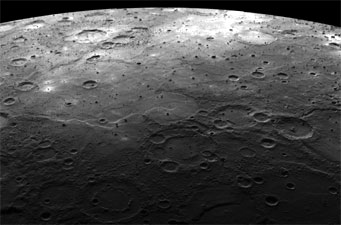 Mercury's Horizon as seen from the Messenger Spacecraft

These findings, announced in a NASA press briefing last week and in four papers in the May 1st Science, show a planet racked by magnetic flux, bombarded by the solar wind, and covered in ancient lava.

During the October flyby, Messenger imaged around 30% of Mercury’s surface never seen by spacecraft before. Researchers discovered a well-preserved, 430-mile-wide impact basin, recently named Rembrandt, thought to date to the period around 4 billion years ago when large asteroids were pummeling the inner planets.

The Rembrandt Basin exhibits a “wheel and spoke” type pattern of ridges and troughs in its floor never seen before in the solar system. According to Messenger lead scientist Sean Solomon (Carnegie Institution in Washington, D.C.), “We don't yet have a good mechanical model for what might have produced such a pattern.” 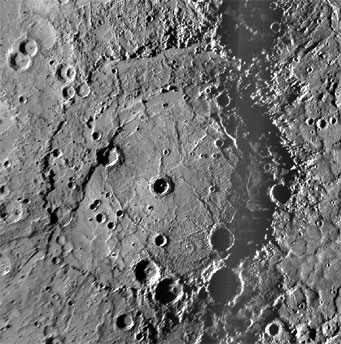 The Rembrandt impact basin, the diameter of which would stretch from New York to Boston, exhibits a wheel-and-spoke pattern, the first of its kind seen in the solar system.

Looking at impact-crater ejecta, much of the material excavated from the deepest levels is slightly bluish (which is only apparent after color enhancement) and thought to be volcanic in origin. Volcanic plains are now thought to cover nearly 40% of Mercury’s surface, whereas they cover only about 20% of the Moon’s surface. Combining this with other evidence such as apparent volcanic vents and lava-flooded craters, it becomes clear that volcanism was important in shaping Mercury.

The largest fault on Mercury runs down the middle of the Rembrandt Basin. The fault’s size — similar to California’s San Andreas Fault — and those of similar features elsewhere on the planet imply that Mercury contracted after it formed, which has been known since the Mariner 10 expedition but confirmed even more strongly with Messenger. This contraction lead to tectonic activity and a history that is unlike that of any other planet in the solar system. 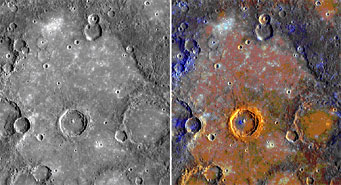 Photo of Mercury before and after color enhancement. Mercury is almost uniformly gray, but color-enhanced images have allowed scientists to map different materials in the crust. This allows researchers to study the planetâ€™s geology and should eventually help them pin down the composition of Mercuryâ€™s crust.

Detailed observations of Mercury’s changing magnetosphere reveal that it’s strongly coupled to the solar wind. The data also indicate that Mercury has a magnetic north and south pole like Earth, which is expected if an active dynamo in the outer liquid core is producing the field. Mercury’s metallic core is a larger fraction of its interior than for any other planet, approximately three-fourths of the planet’s radius.

Messenger’s detailed readings of Mercury’s magnetosphere and the composition of its tenuous atmosphere may help answer questions about Mercury’s formation and history. Knowing the planet’s composition will allow scientists to distinguish among differing origin theories and help answer lingering questions about how the planet came to be so dense with such a large core.

Researchers made the first detection of magnesium in Mercury’s atmosphere and extended neutral tail, which points away from the Sun. Messenger also measured calcium and sodium, which were previously known to exist. But the calcium and magnesium are not distributed in the same way as sodium atoms, which is surprising given their chemical similarities. The extended sodium tail is much stronger at high northern and southern latitudes, but magnesium shows a more uniform distribution.

Messenger also detected relatively heavy ions in Mercury’s ultrathin atmosphere. Because these charged particles are uncommon in the solar wind, scientists think they originate from the planet. This could be a new way to probe the planet’s surface composition.

Spectroscopic measurements were correlated with magnetic fluctuations as Messenger flew near the planet, and a stronger northern component to the sodium tail while that hemisphere was more exposed to charged particles from the solar wind is evidence that the Mercury’s atmosphere is created at least in part when charged solar ions bombard atoms on the surface and propel them outward.

“Messenger’s second flyby has strongly reinforced the inference from the first flyby that Mercury is an extremely dynamic planet and has been so throughout its history,” says Solomon. “The science team looks forward to our next flyby and particularly to the mission’s orbital phase in anticipation that still more of these dynamical processes will be revealed.”

Messenger is scheduled for a third flyby of Mercury on September 29th. It will go into orbit around Mercury in March 2011.

Valerie Daum is an intern at Sky & Telescope.

The spoke-and-wheel pattern could have been the result of two separate impact events. Given how heavily cratered the area is, it seems quite likely that the first (larger) impact left a more traditional crater, followed by a second impact similar to Tycho on our moon.