Once thought to be a stable source in the sky, the Crab Nebula has erupted in another gamma-ray flare.

The Crab is at it again. 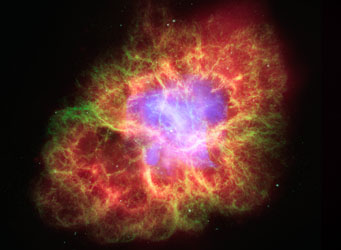 This composite image of the Crab Nebula combines a Chandra X-ray image in light blue with the Spitzer Space Telescope infrared image in red and Hubble Space Telescopeâ€™s optical image.

On March 3rd the Fermi Gamma-ray Space Telescope spotted a flare from the Crab Nebula, a spike in gamma-ray emission that’s three times greater than the average output. The Italian AGILE satellite detected it, too, and on March 4th both teams sent telegrams calling for more observations. As of yesterday, the flare is ongoing.

This flare isn’t the Crab’s first fit. Since 2007 AGILE and Fermi have detected about a half dozen events, the most fantastic that of April 2011, when the Crab erupted in an outburst at least 30 times brighter than the nebula’s norm. The new flare is the brightest since that event. These flares put out 1,000 times more power than the Sun does at all wavelengths.

Astronomers still don’t understand why these events happen. The Crab Nebula, or Messier 1, is the remnant of a supernova seen on Earth in AD 1054 and one of the brightest gamma-ray sources in the sky. Inside it the dead star’s core spins 30 times per second as a pulsar, shooting its lighthouse-like beam into space as it whirls. A hot, magnetized wind of electrons and positrons streams away from the pulsar and dumps energy into the surrounding gas, making it glow. 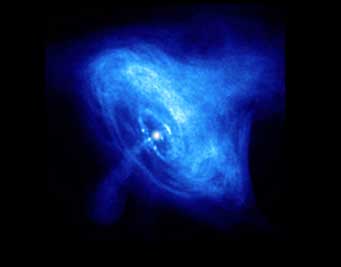 The Crab pulsar is the white dot in the center of the vortex revealed by NASA's Chandra X-ray Observatory. The inner ring is probably created when the pulsar's wind slams into the surrounding nebula, and energy from this collision makes the whole structure glow. Somewhere inside here gamma-ray flares are created.

The pulsar’s wind could be to blame for the flares, says Fermi team member Rolf Buehler (DESY Zeuthen, Germany). He and his colleagues think that somewhere in the wind magnetic fields suddenly snap into new configurations, accelerating electrons that then emit the gamma rays as they corkscrew along magnetic field lines. These flares should originate within about one-third of a light-year from the pulsar and come from a region about the size of the solar system (that’s about 1/10,000 the size of the nebula).

But so far attempts to nail down the flares’ locations have failed. Gamma-ray telescopes don’t have great angular resolution, meaning astronomers need to use lower-frequency instruments to narrow in on an event’s place in space. Such efforts have turned up nothing: observations in radio, infrared, and X-rays haven’t detected conclusive signs of a flare.

“At the moment we are all a bit mystified,” Buehler says.

The Keck Observatory on Mauna Kea and the Hubble and Chandra Space Telescopes have already joined the campaign to try to catch the current flare at lower energies. Buehler says that they expect the event to last about 10 days, given previous behavior, but they’ve still found no connection between how bright the flare is and how long it lasts, so duration is anyone’s guess.

There’s a bit of irony in the Crab’s flaring behavior: the nebula used to be considered a steady emission source, and it’s often been used to calibrate observations in X-ray and gamma-ray astronomy. Detecting the variability has only become possible in the last five years or so with the advent of newfangled instruments.

NASA released a video (below) after the 2011 whopper, which does a great job explaining the flares and putting the Crab in context.