NASA announced this week that its next Discovery mission will follow Curiosity to the Red Planet, but the project — named InSight — has a much different assignment than the rover’s. 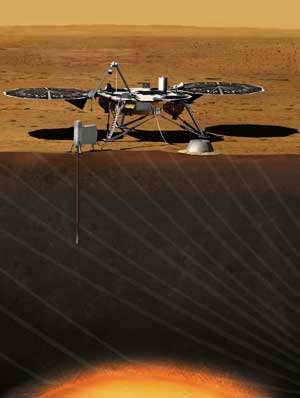 Artistâ€™s rendition of the proposed InSight lander. The lander will set down a seismic experiment (hat-like thing on the landerâ€™s right) and a thermal experiment (left, with drill reaching down into the planet). The drill will only go 5 meters, but that should be enough to learn about whatâ€™s going on deep inside.

August is apparently the month of Mars. After a death-defying descent, NASA’s rover Curiosity landed safely on the Red Planet, which this week makes a bright triangle with Saturn and Spica in the twilight sky. Now, NASA has announced that Mars will also be the target for its next Discovery-class mission, named “Interior Exploration using Seismic Investigations, Geodesy and Heat Transport,” or InSight.

NASA picked InSight (formerly known as GEMS) over two other missions, called Comet Hopper and Titan Mare Explorer (TiME). Discovery missions are the smallest of the space agency’s solar-system programs, using relatively small budgets (less than $425 million, minus the launch) to do hardcore science. Examples of Discovery-class missions include the Messenger spacecraft currently orbiting Mercury and the Kepler mission — which, although it’s looking for exoplanets, is still by nature a planetary explorer.

It’s perhaps a bit odd that the mission has received a green light despite the looming deep cuts in NASA’s Mars-exploration budget. Those cuts have already forced the agency to kill a proposed lander and to back out of a partnership with the European Space Agency.

But part of InSight’s appeal is that it doesn’t sell itself as merely a Mars mission. Rather, it’s a mission to explore terrestrial planets’ history. Like the other inner planets, Mars is large enough that its interior differentiated as it formed, meaning that the lighter minerals rose and the heavier ones sank. (The creation of iron-rich cores is a direct result of this process.)

Nevertheless, what’s inside Mars remains largely a mystery. So the InSight team hopes to probe the planet’s formation history with three experiments, two of which it will set down on the Martian surface using the tried-and-true Phoenix spacecraft and lander, the third which will operate from orbit. These experiments will use marsquakes, subsurface temperature measurements, and precise measurements of the planet’s rotation to study Mars’s interior, hopefully providing data that will reveal the core’s size and the planet’s detailed composition.

In keeping with spreading the costs around, InSight is an international mission. The seismic instrument will come from the French space agency (CNES), with participation from French, Swiss, German, and British institutes, as well as NASA’s Jet Propulsion Laboratory. The heat flow experiment will be from the Germany’s DLR, and the rotation one will be JPL’s.

If all goes as planned, InSight will launch and land on Mars in 2016 and have a two-year mission.

You can learn more about the mission at InSight’s official website. And below is a brief NASA/JPL video of mission scientists explaining what they hope to learn about Mars..