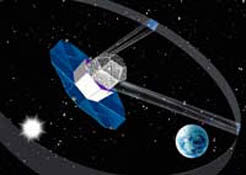 The ill-fated FAME mission, which would have measured 40 million star distances with vastly improved precision, is unlikely to become more than this conceptual drawing.

Following several budget increase requests over the past year, the Full-Sky Astrometric Mapping Explorer (FAME) has been denied the funding necessary to move into its construction phase. NASA opted to cancel the program, citing budget cuts — FAME's $180 million cap would have been exceeded by at least $25 million. The price hike was due to skyrocketing costs, and expensive instrument
delays. Principal Investigator Kenneth Johnston (U.S. Naval Observatory) was unable to procure the additional funds, and on January 4th, he announced the cancellation to his science team.

Johnston is currently attempting to salvage the mission, which may be possible if the team can repropose the project to the NASA Discovery program. Discovery permits missions up to $299 million; however, its scope is limited to solar-system exploration and extrasolar planet detection. This does not bode well for FAME, as only a fraction of its science concerns planets. Johnston is awaiting word from NASA of any opportunity for reconsideration.

Astronomers worldwide were counting on FAME to provide the next generation of data on star distances and motions — data fundamental to virtually every aspect of astronomy beyond the solar system — as the next step after the pioneering Hipparcos mission of the early 1990s.

FAME would have measured the positions, parallaxes and photometry of 40 million stars between magnitudes 5 and 15 with accuracies up to 50 microarcseconds, about the breadth of a hair at 150 miles away and some 20 times finer than Hipparcos. "It's a shame," says former project scientist Alan Boss (Carnegie Institution of Washington) "FAME would have returned excellent science in an absolute sense, as well as excellent science for the dollar."