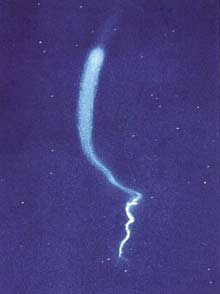 A previous cloud of glowing TMA released by NASA into the upper atmosphere.

If you see weird glowing clouds expanding in a clear sky over the US Eastern Seaboard tonight (Sunday June 29th), relax. They're not UFO exhaust or a terrorist plot. They are a luminous chemical released by NASA as part of an experiment to trace winds in the Earth's ionosphere. If conditions for the experiment are poor tonight (as they have been for the last several nights), the launches will be rescheduled for tomorrow night, or the next, up to as late as July 10th.

Three sounding rockets will launch from Wallops Island, Virginia, and dump trimethylaluminum (TMA) into the uppermost atmosphere over the Atlantic Ocean at altitudes of 90 to 175 kilometers (56 to 110 miles). The releases will occur roughly 60 to 90 minutes apart. A fourth rocket will help track the results. Each milky white cloud should be visible for about 20 minutes from southern New York State to South Carolina and as far west as West Virginia.

"Winds in the ionosphere impact space weather just as the winds on Earth impact our weather," said Gregory Earle (University of Texas, Dallas) in a NASA press release. "Space weather in turn can affect satellites orbiting the Earth and communication and electrical systems on the ground. The clouds will act as a tracer and allow us to view the winds at various altitudes over a period of time."

NASA emphasizes that the TMA is harmless. As it burns and emits light, it is converted to aluminum oxide (an ingredient in antacid pills), carbon dioxide, and water.

UPDATE JUNE 30th: The rockets were finally launched and the experiment successfully carried out last night. 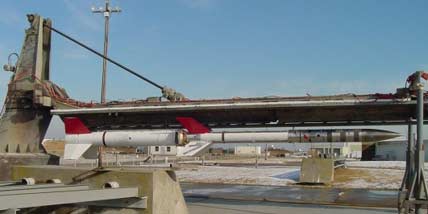 A 33-foot (10-meter) Terrier-Orion sounding rocket like the three that will be used for the chemical dumps.