While astronomy enthusiasts understand the importance of dark, pristine skies, the science of measuring light pollution is not well established. Now, researchers with the US National Park Service (NPS) have released data as part of a program to measure the impact of light pollution on the relatively unspoiled skies of western US National Parks. The NPS Night Sky program, the first of its kind, systematically detects and analyzes night-sky brightness in national parks to understand current dark-sky quality and identify light-pollution sources.

The mobile data-collection system, developed with assistance from professional astronomers and the International Dark-Sky Association (IDA), uses a research-grade digital camera to produce panoramas and fish-eye views of the heavens with a series of images. The CCD camera is attached to a laptop computer and mounted on a robotic tripod; a green visible-band filter blocks infrared and ultraviolet light to closely approximate human vision. The images are then processed using false color to enhance the contrast between sky darkness and natural and artificial light sources. 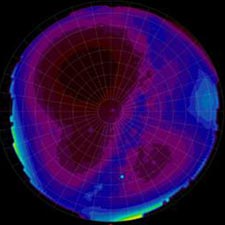 From the Nevares Water Tank in Death Valley National Park in southern California, the Las Vegas light dome extends to 30°above horizon (right) in a fish-eye view of the sky with false-color-enhanced contrast.

To further their efforts, the park service and the IDA are currently developing a new "Dark-Sky Park" program to identify national and state parks that demonstrate exceptional commitment to, and success in implementing, the ideals of dark-sky preservation. Parks participating in the program will achieve a "Dark-Sky Park" designation for meeting minimum requirements. Scott Davis, chief operating officer of the IDA, says that, among other things, the program will require the parks to commit to shielding two-thirds of their existing outdoor light fixtures to achieve "Dark-Sky Park" status.

The NPS commitment to night-sky monitoring is an important step for light-pollution opponents — it demonstrates that a government organization at the federal level is taking action to protect star-filled skies as a valuable natural resource, and to correct careless lighting practices.

More information about the program can be found at: http://www2.nature.nps.gov/air/lightscapes/monitorData/index.cfm.