Nearby Remnant of a Gamma-Ray Burst? 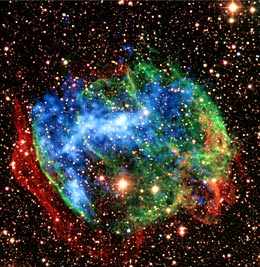 This composite X-ray (blue) and infrared (red and green) image shows the supernova remnant W49B to be a barrel-shaped nebula, consisting of bright infrared rings around a glowing bar of X-ray-hot gas rich in iron and nickel. At the ends of the barrel, the X-ray gas seems to flare out to make a hot cap. The cap is surrounded by a flattened cloud of molecular hydrogen — indicating that jets from the explosion plowed into a large, dense gas cloud.

Midway between the stars Delta and Zeta in the constellation Aquila, 35,000 light-years from us around the curve of the Milky Way, lurks the remnant of a titanic gamma-ray burst that exploded a few thousand years ago — right in our own galaxy. At least that’s the speculative claim of Jonathan W. Keohane, an astronomer from the Spitzer Science Center at NASA’s Jet Propulsion Laboratory in Pasadena. In a poster presentation at the American Astronomical Society meeting in Denver this week, Keohane argues that the well-known supernova remnant W49B is actually the remains of a gamma-ray burst. But other astronomers say it’s much too early to tell.

Gamma-ray bursts are closely related to core-collapse supernovae: both mark the violent deaths of massive stars when their dense cores implode. But while a supernova expels only the star’s mantle into space, leaving a collapsed core that often ends up as a neutron star, a gamma-ray burst turns the star almost inside out, spewing two narrow jets of matter from the core right through the star's poles and into space at next to the speed of light, probably leaving a black hole behind at the center (Sky & Telescope: March 2004, page 32). When one of the jets is pointed toward us, we can see it as a gamma-ray burst even from billions of light-years away.

Keohane says he became suspicious of W49B when he noticed that it does not contain a neutron star. Many other supernova remnants lack detectable neutron stars near their centers, but in Chandra X-ray Observatory data, W49B also has a peculiar shape, with a bar-like structure that might be the ghostly remains of a bidirectional jet.

Chandra X-ray spectra also show that the remnant contains large amounts of nickel and iron, which are produced in the core of a massive star but are not easily expelled in normal core-collapse supernovae. Finally, images made with the 200-inch Hale telescope at Palomar Mountain reveal that the explosion took place in a dense molecular cloud, a sign that the unfortunate star was indeed massive and short-lived — otherwise it would not have blown up so close to the place it was born. The Palomar images also show that a fierce stellar wind had carved a big cavity in the molecular cloud before the star exploded. As Keohane says, "the star dug its own grave."

But gamma-ray-burst researcher Timothy W. Giblin (College of Charleston) says he is "not terribly convinced." According to Giblin, "there is a reasonable chance that this could indeed be a gamma-ray-burst remnant — the iron and nickel data are certainly a plus — but precise X-ray spectroscopy and velocity measurements would help a lot" to establish the case. "It’s very speculative at this point."

For one thing, even normal supernovae seem to involve oppositely-directed jets, like the ones the remnant seems to display.

On the other hand, Giblin concedes, "we know supernovae and gamma-ray bursts are closely related, but almost nothing is known about the relative frequency." If the opening angle of gamma-ray-burst jets is extremely small, as has been suggested by Donald Q. Lamb (University of Chicago), we see only see a tiny fraction of all bursts, so maybe it would not be too improbable that one went off in our own galaxy just an astronomical eyeblink ago.

If Keohane is right — and that’s a very big if — would ancient civilizations have witnessed a blinding explosion in Aquila? Probably not, says Keohane. If it was indeed a gamma-ray burst the jets were not pointed in our direction (the axis of the remnant is tipped about 70° from our line of sight), so the event would have been no more conspicuous than a normal supernova. And the dense molecular cloud around it might have hidden it completely.