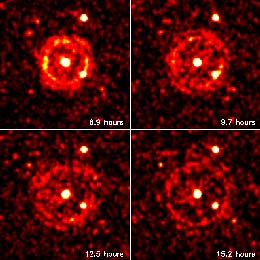 The ESA spacecraft XMM-Newton captures an X-ray light echo from gamma-ray burst (GRB) 031203. This GRB, which occurred 1.6 billion light-years away, is one of the closest and faintest bursts ever detected. The light echo is an optical illusion caused by gamma-rays from the burst scattering off dust in the Milky Way galaxy. Click on this image to view a stunning animation of the expanding light echo.

Gamma-ray bursts (GRBs) are becoming well-known for their frequent shots of high-energy in the deepest corners of space, many billions of light-years away. But now astronomers are beginning to think that these mega-explosions are going off all around us — we just can't see most of them.

On December 3, 2003 the European Space Agency's Integral satellite detected a long-duration GRB in Puppis. Follow-up observations with space- and ground-based telescopes revealed a fading afterglow in a galaxy only 1.6 billion light-years away. This burst, named GRB 031203 for the date it was observed, was nearly 1,000 times less-energetic than typical GRBs and, more interestingly, it's not the only one that has been seen so close to our galaxy.

Two papers published in the August 5th Nature report that GRB 031203 is comparable to an oddball GRB event from 1998 that was only 130 million light-years away. Each GRB was associated with an unusual supernova containing similar spectra and light curves. The papers also conclude that these two peculiar GRBs reside on the edge of detection for a whole new species of weak GRBs. Alicia Soderberg (Caltech), the lead author of one of the Nature papers, believes that the similarity of these low-luminosity GRBs is too significant to ignore. "For years it was argued that the 1998 event was a fluke, a bizarre gamma-ray burst that is different from all others," says Soderberg. "However, now with GRB 031203 we have two such events, which look similarly 'fluke-ish,' so we need to reexamine our previous conclusions." 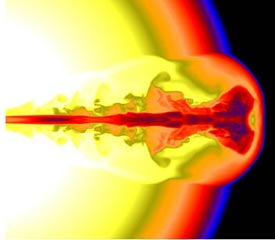 A computer simulates a jet of gamma-rays protruding from a dying star. The jet is created from the rotating material just outside the newly formed black hole. The jet will produce a GRB once it escapes the stellar atmosphere.

Most astronomers think GRB production involves the deaths of massive stars in hypernovae, resulting in the formation of a black hole. Although core-collapse supernovae accompanied both nearby GRBs, it is unknown why they were so faint. GRB theorists like Stan Woosley (University of California, Santa Cruz) are very interested in this connection between low-luminosity GRBs and supernovae. "Do GRBs always have supernovae?" asks Woosley. "Since supernovae also occur when massive stars die, it is not surprising that there is some sort of relation to GRB production. But what is it?" 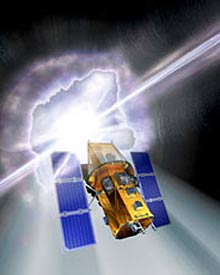 When it is launched this fall, NASA's Swift gamma-ray detector will relay a GRB's location to ground stations just seconds after detection so astronomers have a better chance of observing the GRB's brief afterglow.

It may not be long until astronomers get some answers with NASA's highly anticipated Swift mission, scheduled to launch in October. This sensitive gamma-ray observatory will be capable of detecting faint GRBs in the nearby universe. "It is more sensitive than Integral and it will be able to determine how big this new population really is," says Swift principal investigator Neil Gehrels (NASA/Goddard Space Flight Center). "With each new type of GRB we learn more about how these fascinating events are produced."