Using a balloon-borne instrument chilled to nearly absolute zero, a team of U.S. scientists has serendipitously detected an unexplained hiss of relatively low-frequency radio waves that seems to pervade the universe. 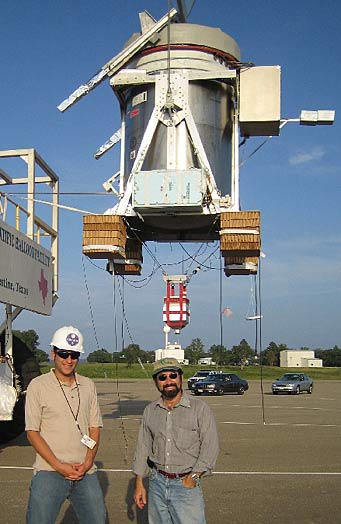 The supercooled ARCADE radio instrument is seen here just before its launch in July 2006 from the National Scientific Balloon Facility in Palestine, Texas.

The discovery represents yet another type of "cosmic background radiation" — distant emission coming from everywhere in the sky — to go along with the backgrounds previously discovered in microwaves, infrared light, X rays, and gamma rays.

The microwave background is from the hot gas that filled the whole universe as seen 380,000 years after the Big Bang. The other backgrounds are from later, but still extremely distant, astronomical sources that are too faint and numerous to resolve individually in most cases.

Kogut and his colleagues found the radiation using an instrument named ARCADE (Absolute Radiometer for Cosmology, Astrophysics, and Diffuse Emission, seen above), which flew 120,000 feet over Texas on July 22, 2006. The ARCADE detector is housed in a dewar, with liquid helium circulating around the instrument to keep it cooled to 2.7° C above absolute zero (minus 454.8° F). By chilling the detector, the team could be assured that it was detecting weak emission from space, not from the detector itself. It listened at frequencies around 3, 8, 10, 30, and 90 gigahertz. 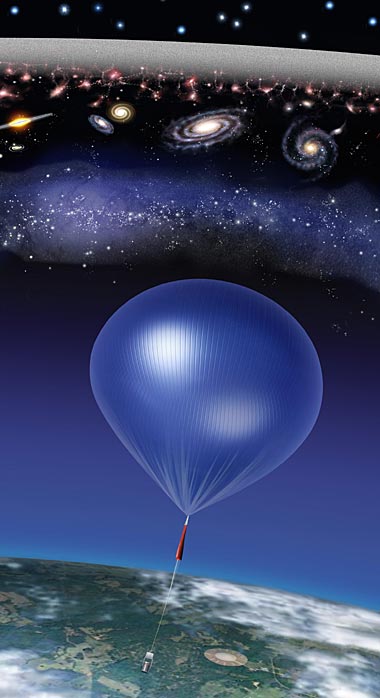 In this artist's symbolic painting, a balloon carries ARCADE aloft to look back through time and space: through the Milky Way (starry band) to other galaxies, the web of distant galaxy clusters and strings, the reionization era (gray band; one guess is that the new radio background comes from here), and the first superstars and quasars lighting up at the end of the Dark Age after the Big Bang. Do we need to say, "Not to scale"?

The group was hoping to detect redshifted heat emission from the very first stars: the long-sought "Population III" superstars that first lit up the universe near the end the Dark Age, several hundred million years after the cooling of the Big Bang.

But to the surprise of everyone, ARCADE found an excess hiss of lower-frequency radio waves, peaking in the 3 and 8 GHz detectors. Even after subtracting for Milky Way and other known sources, the hiss remained. It appeared throughout the big region of sky (7% of the entire celestial sphere) surveyed during the 2.5-hour part of the flight that ARCADE took data. Overall, the radio noise is six times louder than the combined radio emission from all known radio sources.

"We really don't know what it is, but it's not the combined emission of radio galaxies in the universe, there simply aren't enough of them," says team member Michael Seiffert (NASA/ Jet Propulsion Laboratory). "You start out on a path to measure something — in this case, the heat from the very first stars — but run into something else entirely, something unexplained."

Given that these results were just announced, theorists haven't had much time to digest the information. So for now, there are no convincing explanations for this excess radio hiss. But the team is confident that the detection is real, especially because the team has found confirmation of the signal in previous experiments.

"If the result holds up, it is quite interesting," says cosmologist Gary Hinshaw (NASA/Goddard), who is not a member of the ARCADE team. "It either means that radio galaxies, or some class of radio galaxies, have different properties than were previously thought, or perhaps there is some other, more exotic mechanism for producing radio emission in the universe."

Making this discovery more interesting is the fact that some of the flight hardware was built by high-school students in Greenbelt, Maryland, and by college undergraduates, helping to keep costs low.

"The payload is a good example of the kind of risk-taking you can take with a sub-orbital program," says Kogut. The total cost of ARCADE is less than $4 million, a tiny fraction of the cost of a typical astronomical satellite. And that cost was spread over a decade.

The group has submitted four papers on the ARCADE results to the Astrophysical Journal: ARCADE 2 Measurement of the Extra-Galactic Sky Temperature at 3-90 GHz, Interpretation of the Extragalactic Radio Background, ARCADE 2 Observations of Galactic Radio Emission, and The ARCADE 2 Instrument.

Just listen on 80 meters after sunset if you want to hear noise at a S-9 level!

Keep up the ggod work, unravelling the cosmic early phases is making progressand is important work.

It's interesting to find that this radio noise at 3 and 8 GHz frequencies pervades the entire universe very similar to the cosmic background radiation at other frequencies, and in a way indicates that it may be part of the same processes from the first 3 minutes onward. What came to my mind as possible explanations is, possibly the energy and material created around the first 3 minutes, being at their own frequencies (incredibly high at the time from the incredibly high heat)interacted and the resonance frequencies created are these radio waves detected by ARCADE.
As an alternative idea, its may be radiation caused by the noise of virtual particles popping in and out of space, or possibly the "grunt" of dark energy as it pushes the universe out. Then again, the dark energy might be the virtual particles popping in and out of our universe! As Richard Feynman has discussed, virtual particles have to be added into the equations to make them come out correctly when compared to experiment, so they very possibly might be involved.