One of the true pleasures in science comes when a new and surprising fact is uncovered about something thought to be utterly familiar. Such is the case this week with the revelation that Spica, one of the best-known stars in the night sky, is an eclipsing binary. Every 4.0145 days one of the two separate stars that makes up this system crosses in front of the other, blocking a portion of its light. 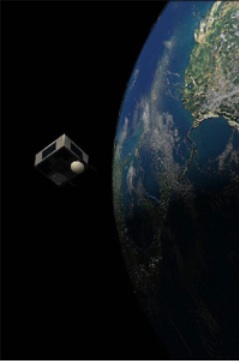 The tiny MOST telescope comes up big on Spica.

How could astronomers have missed this fact? It’s no scandal. Spica’s eclipses are the merest grazes. Each time it happens the total light output of the system dips by less than one hundredth of a visual magnitude. Nevertheless, these events are of interest to science because they offer a greatly improved understanding of the two star's sizes and shapes and the complex physics at work in a nearby and rather special star system. Astronomers have known since 1890 that Spica was a spectroscopic binary, but now we have a better handle on it.

What's most amazing is that the eclipses were seen at all. For that we have MOST to thank — the hardest working microsatellite in astronomy.

MOST stands for Microvariability and Oscillation of Stars. It’s a suitcase-sized satellite that specializes in staring at stars for weeks on end — something that is not practical with ground-based telescopes that have to deal with day and night. And because it's above our twinkle-inducing atmosphere, MOST can measure star brightnesses with much higher precision that is ever possible from the ground.

Maarten Desmet, a Ph.D. student at the Institute for Astronomy, Katholieke Universiteit in Leuven, Belgium, and his supervisor Conny Aerts, led the Spica campaign in collaboration with the MOST team. The observations involved more than three weeks of steady staring at Spica to get a crisp, complete, light curve of several complete orbits. 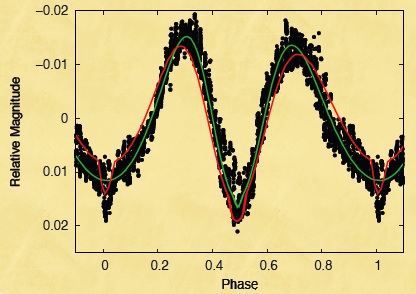 Spica's light curve as measured by MOST. The green line is the expected curve with no eclipses. The red line shows a model of the system with eclipses. The eclipses appear as periodic downward spikes at the phase where we see the egg-shaped stars end-on, with the dimmer one in front.

What makes detecting the eclipses a challenge is that Spica already varies in brightness once per orbit. Spica's two components are both intensely hot and pale blue. The larger and brighter of the pair is a slightly pulsating variable of the Beta Cephei variety. Moreover, they orbit one another so closely that their shapes are distorted by their mutual gravity into egg shapes, (prolate spheroids), with their long axes directed toward one another.

Historically, this configuration led to confusion about whether Spica is an eclipsing binary. Because prolate spheroids look bigger when viewed sideways (click here to manipulate a prolate spheroid and see for yourself!), Spica gets marginally brighter when its two stars are oriented side-on to us rather than end-on.

This so-called “ellipsoidal” variation was originally mistaken for a slight periodic eclipse. You can find it misidentified this way in the venerable Burnham’s Celestial Handbook. By the 1970’s, however, that view was changing, and in more recent literature Spica is referred to as non-eclipsing.

The books will have to be corrected once more now that Spica’s grazing-eclipsing nature has been established by MOST. The variations are much smaller than those previously attributed to eclipses, so this effect is not what was measured in earlier decades.

So what do astronomers get out of this? Plenty, says Jason Aufdenberg of Embry-Riddle Aeronautical University in Florida, who was not a member of the discovery team. For starters, we get the diameter of the eclipsed star, putting an upper limit on its mass. We also get a more accurate value for the inclination of the system’s orbit (how it’s oriented with respect to our line of sight). These can help nail down the more complex aspects of the system, including how the mass distribution in the two stars is affected by their tidal interactions.

“This a fascinating system,” says Aufdenberg.

At 260 light years away, Spica offers one of the nearest examples of stars that are likely go supernova one day. The better they can be characterized the more confident astronomers can be about using them as a reference to understand more distant stars of the same type.

“The eclipses mean it’s one-shop-stopping for this type of star,” says Jaymie Matthews of the University of British Columbia, who is lead scientist for MOST.

The results will be unveiled tomorrow at the Stellar Pulsationmeeting in Santa Fe, New Mexico.

I see the spikes clearly at the minima, but I wonder about the large scatter at peak brightnesses when the prolatenesses of the pair lie in the plane of the sky. It seems strange there is more scatter and the smoothed curves are farther from the data there than they are at the minima. Do B1-B2 stars suffer flares like our Sun and te M Dwarfs? I assume also that these two are tidally locked in rotation, at least at the surface; whereas early-type stars tend to be rapid rotators like Regulus and Altair.
Speaking of the latter (and just a tad off-topic), itâs rapid spin was noted in Bakerâs Astronomy in the early fifties, leading to the only technical goof in Forbidden Planet, which is still one of the best sci-fi movies ever made.

The three gibberish characters appearing twice above are just apostrophes I put in with alt-0146 on my XP box. Why do some web pages do this and others do not? Also I tried to italicize the titles [with simple html] to no avail. Nuts!

Another triumph for Canada's "Humble Space Telescope". Congratulations to Jaymie Matthews and his team.

"Spica already varies in brightness once per orbit...Spica gets marginally brighter when its two stars are oriented side-on to us rather than end-on."

Wouldn't it vary twice per orbit? For that matter, wouldn't the eclipsing binary?