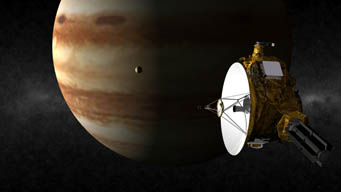 Artist conception of the New Horizons spacecraft during the Jupiter encounter on February 28th.

Although hardly a year has elapsed since NASA launched its New Horizons spacecraft, at 5:45 Universal Time on February 28th, the probe will pass just 1.4 million miles (2.3 million kilometers) from the center of Jupiter. The craft will use the gas giant's gravity to boost its speed by nearly 9,000 miles per hour on its way to Pluto and points beyond. Once past Jupiter New Horizons will be traveling at more than 51,000 miles (82,000 km) per hour, making it the fastest spacecraft to date.

The mission team will use the flyby as a test run, studying the Jovian system using the spacecraft's seven science instruments. Analysis of those observations will help mission engineers to adjust operating parameters long before the spacecraft reaches Pluto in 2015. If the event goes as planned, New Horizons will provide the first close-up study of Jupiter and its four largest moons since the Galileo spacecraft mission ended in 2003. It will also return the first detailed observations of the recently formed storm system dubbed "Red Spot Jr." 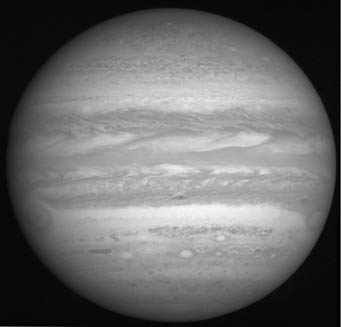 New Horizons' Long-Range Reconnaisance Imager (LORRI) captured this mosaic of Jupiter on February 10th in preperation for the flyby later this month. At the time the spacecraft was 29 million kilometers (18 million miles) away. The smallest discernible features are 290 km (180 miles) across.

Responding to requests from the New Horizons' mission team, amateur astronomers will be observing and photographing Jupiter prior to and following the encounter to provide additional reference images. These views were studied and used to plan specific observations of the Great Red Spot and Red Spot Jr., since over time both features' locations can vary in longitude.

The Association of Lunar and Planetary Observers (A.L.P.O.) Jupiter coordinator Richard Schmude, Jr. states, "The New Horizons probe will photograph Jupiter for at least two months at all longitudes and amateurs are asked to image Jupiter whenever possible. These images may be used by professional astronomers at a later date to interpret the New Horizons images." All observations should be sent to Schmude.