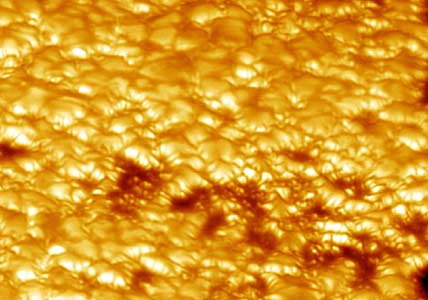 A sideways view of hills (granules) and valleys near the edge of the Sun. This image, made by the Swedish Solar Telescope, highlights the three-dimensional nature of the solar surface when seen at a low angle. Note the many bright bits of faculae on the walls of granules. The actual image is in black and white; it has been colorized here to emphasize contrasts.

Solar astronomers have gathered this week in Columbia, Maryland, for a meeting of the American Astronomical Society's Solar Physics Division. Many are using the opportunity to announce their recent discoveries about the Sun. Here are some highlights that have come out of the meeting.

The new, state-of-the-art Swedish Solar Telescope (SST) on La Palma in the Canary Islands (S&T: February 2003, page 16) continues to strut its stuff. Astronomers using the 1-meter telescope claim to have taken the highest-resolution images ever made near the edge of the Sun's disk, thanks to the telescope's advanced adaptive-optics system. Near the solar limb we see the Sun's surface at a low, slanting angle, affording a three-dimensional look at solar hills, valleys, and canyons (see the picture above). Ground-based views near the solar limb have long given the impression that sunspots are set in shallow hollows. For the first time, the SST's supersharp images also show the solar granulation (convection cells about 1 arcsecond wide) looking like puffy pillows billowing upward.

Led by Tom Berger (Lockheed Martin Solar and Astrophysics Lab), the group of astronomers has also resolved the vertical structure of faculae — the patchy bright "clouds" seen hovering around sunspot regions near the solar limb. In views like the one above, the faculae appear to be made up of many hot walls of elevated solar granules where magnetic lines of force have piled up against the granules. Apparently, the reason we don't see faculae near the center of the Sun's disk is because there we are looking more directly down the granules' walls. More images and details of the researchers' work appear in their press release.

Another state-of-the-art solar instrument is the 0.76-meter Dunn Solar Telescope at the US National Solar Observatory in Sunspot, New Mexico. It has just been outfitted with an improved adaptive-optics system producing very sharp images like the one below, right. The system's success bodes well for its use on the National Solar Observatory's proposed 4-meter Advanced Technology Solar Telescope. More information, pictures, and movies are on the NSO's Web site.

Sample images through the Dunn Solar Telescope in New Mexico with its new adaptive-optics system turned off (left) and on (right).

Flares on the Sun can get a lot hotter than solar researchers have thought, say scientists using NASA's Ramaty High Energy Solar Spectroscopic Imager (RHESSI) satellite. Gordon Emslie (University of Alabama, Huntsville) and others recorded X-rays in a solar flare indicating temperatures as high as 45 million degrees Celsius — more than 10 million degrees hotter than previously seen. The breakthrough came courtesy of RHESSI's high resolution. Earlier observations have only averaged across entire flares, which are small compared to the Sun's face. RHESSI was able to resolve structures within the flare. Its images show an extremely hot blob suspended 11,000 kilometers above the solar surface and three hot spots below where electrons from the blob, channeled by magnetic fields, impact the surface. An image of this structure is available.

Solar flares are often associated with coronal mass ejections (CMEs): large, powerful puffs of solar wind that sweep through the solar system. Those that hit Earth can cause magnetic disturbances and auroras as well as electrical problems in space and on the ground. Peter Gallagher (NASA/Goddard Space Flight Center), Meredith Willis-Davey (Southwest Research Institute), and others used the Transition Region and Coronal Explorer (TRACE) spacecraft together with RHESSI and the Solar and Heliospheric Observatory (SOHO) to track a CME in its earliest stages originating with a flare. As with flares themselves, CMEs seem to be powered by the energy released when adjacent, stretched magnetic lines of force combine and snap into new configurations like tight rubber bands. Willis-Davey also plans to use CMEs as seismic probes to reveal the solar corona's invisible structure.