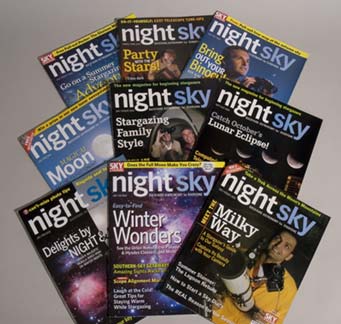 Sky Publishing has decided to stop producing Night Sky, its bimonthly magazine for beginning amateur astronomers. The next issue, appearing in February and dated March/April 2007, will be the last. We are no longer accepting new orders for Night Sky. More information about the disposition of existing subscriptions will be available shortly.

We launched Night Sky in May/June 2004 to serve entry-level stargazers who want to enjoy and explore the heavens but who find Sky & Telescope too advanced for their needs. Apparently, there aren’t as many of these folks as we thought — at least, not enough of them prepared to buy a magazine like Night Sky.

Sky Publishing was acquired by New Track Media in February 2006. NTM chief executive officer Stephen J. Kent explains, “We decided to wind down Night Sky because it never gained traction in the marketplace. Despite three years of aggressive subscription and newsstand marketing, the magazine showed no sign of becoming profitable. I’m as disappointed as anybody, because it’s a terrific product.” Kent adds, “We’ll enhance and improve the editorial mix in Sky & Telescope and on our website to make sure we continue to serve amateur astronomers of all levels.”

Launching a new magazine is always a gamble. According to Samir A. Husni, chair of the journalism department at the University of Mississippi and a leading analyst of the magazine industry, 60% of new magazines fail in their first year, 80% fail by their fourth year, and 90% are gone within 10 years. Sky & Telescope, founded in November 1941, is now in its 66th year of continuous publication.