Rereleasing old movies converted to 3D may be all the rage these days, but here’s a star-studded 3D update worth waiting for: the core collapse of a supernova. 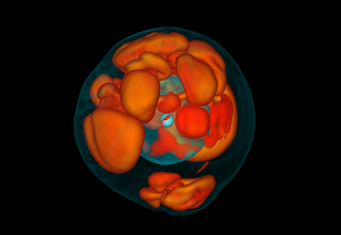 This image from the team's simulation depicts the core (roughly the inner 100 km) collapsing in the beginning stages of a Type II supernova. The infalling matter is bubbling from the hot blast of neutrinos, pushing against the shock wave of collapsing matter (the outer blue membrane). The just-formed neutron star is visible in the center as the small blue sphere.

Despite the mainstream recognition of these explosive deaths of massive stars, we still don’t understand what triggers them. The conventional wisdom is that when the core collapses to form a neutron star, the recombining protons and electrons release a tremendous amount of energy in the form of neutrinos, creating a shock wave that travels out through the layers of the star. When it reaches the surface — well, not even Michael Bay’s filmed an explosion that large.

But there’s a problem: Theorists just can’t get their model supernovae to explode. In simulations, the shock wave stalls out and never reaches the surface. Until recently, however, these intensive calculations have been made in only one or two dimensions.

This week, a team of researchers at the Max Planck Institute for Astrophysics announced a 3D simulation of the initial stage of a supernova — the core collapse that gives birth to the neutron star. In a video of their simulation, released Tuesday, the shock undergoes a spectacular sloshing behavior called a “standing accretion shock instability.” (Don’t go looking for your 3D anaglyph glasses though — the video itself is traditional 2D.) In future work, they hope to address whether this could help propel the shock through the star.

You’ll see what we mean.