This image sequence shows the Moon moving into, and out of, totality during the evening of November 8, 2003. The sequence matches the way the Moon moved through Earth's shadow; the images were taken (right to left) at 7:50, 8:19, and 8:46 p.m. EST. Each is a 4-second exposure, taken with a Coolpix 4500 digital camera through a 6-inch f/6 homebuilt Newtonian reflector.

Clear skies throughout much of the Americas and parts of Europe and Africa allowed millions of people to enjoy a beautiful total eclipse of the Moon during the night of November 8–9, 2003. For three and a half hours the Moon moved through the umbra, the dark core of the Earth's shadow. But everyone who has seen previous lunar eclipses agreed — this was a very bright eclipse.

According to veteran eclipse observer John Bortle, who watched the event unfold from the W.R.Brooks Observatory, in New
York's Hudson Valley, "Although the umbra-covered portion of the lunar disk does not normally become easily visible in binoculars until the shadow has advanced a good deal of the way across the disk, Saturday evening I picked up the umbra-covered region just three minutes after the partial phase began!" Meteorologist Joe Rao, observing from his home in New York, agreed. "This was the brightest eclipse of the twelve total lunars that I have witnessed (going back to December 1964)." Others noted that a red tint in umbra remained visible on the Moon's face until almost the end of the partial phase. 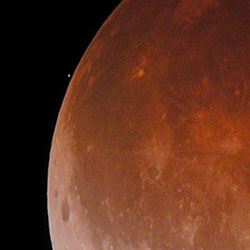 An 8.5-magnitude star in Aries is less than 30 seconds away from being occulted by the totally eclipsed Moon in this image taken at 8:16:02 p.m. Eastern Standard Time on November 8th. This 4-second exposure was taken with a Nikon Coolpix 990 digital camera through a 6-inch f/6 Maksutov-Newtonian reflector.

Totality was brief; the Moon remained completely immersed in the umbra for a mere 25 minutes as it skimmed barely inside the southern edge of our planet’s shadow. During totality, the Moon's lower limb remained bright, causing some to wonder if the Moon was really completely eclipsed. At an eclipse party attended by Sky & Telescope's senior editor Alan MacRobert, several participants commented that the man in the (eclipsed) Moon looked like he had a giant grin on his face.

Although it didn't last long, totality was very pretty. "The gradation of light and color across the Moon's disk was quite impressive," notes Rao. "The Moon's southern limb appeared a dull grayish-white mixed with a very pale, but still evident bluish coloration, while the rest of the lunar disk (at least 75 percent) displayed a ruddy or coppery hue."

Several skywatchers tried to determine the brightness of the Moon during totality. Brazilian amateur Alexandre Amorim estimated a lunar magnitude of –3.4 at mideclipse. This agrees with John Bortle's estimate of –3.6 and makes this eclipse 1.5 magnitudes (four times) brighter than the one seen six months earlier (May 15–16, 2003). 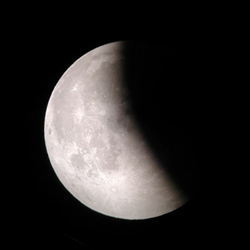 Despite advances in camera technology, it's sometimes still impossible to record what the eye sees. During the partial phases of the lunar eclipse of November 8–9, 2003, the dark portion of the Earth's shadow appeared orange-red to the eye but black in any images that were properly exposed to capture the non-eclipsed portion of the lunar surface.

In Europe, Africa, and western and southern Asia, the eclipse was visible much later at night or before sunrise on Sunday morning. Observers in southern England had a fine view, as did their counterparts in South Africa. Clouds spoiled the scene for some regions of the US, including much of the southeast and the west coast.

The next total eclipse of the Moon falls on May 4–5, 2004, and is visible from central and south Asia, the Middle East, and the eastern two-thirds of Africa. North Americans will see their next lunar eclipse on October 27–28, 2004.