A Bonanza of Comets 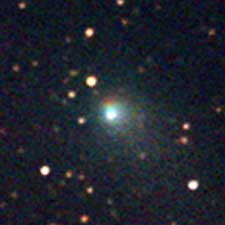 This view of Comet Snyder-Murakami, C/2002 E2, was captured by Tim Hunter on March 18th with his 12-inch LX 200 telescope and Apogee AP7 CCD camera. The exposure is a tri-color composite.

Since the discovery of Comet Ikeya-Zhang on February 1, two more comets have been found visually by amateur astronomers. While neither will rival Ikeya-Zhang's brightness this spring, these new finds show that the era of backyard comet hunting is far from over. Adding to the excitement is the return to the northern sky of Comet LINEAR C/2000 WM1.

The first of the new comets was bagged on March 11th. Douglas Snyder swept up the faint object in Aquila while scanning the predawn skies with a 20-inch f/5 Dobsonian telescope at his backyard observatory in Palominas, Arizona. Seven hours later, as dawn approached Japan, Shigeki Murakami in Matsunoyama, Niigata Prefecture, picked up the interloper with his 18-inch f/4.5 reflector. Designated Comet Snyder-Murakami, C/2002 E2, the object is currently visible in medium-size telescopes as a 10th-magnitude glow moving north-northeast in the morning sky, from Aquila to Sagitta and then to Vulpecula.

"This is such a rare and rewarding event," says Snyder, "and I'm still so overwhelmed at my luck in finding it."

Orbital calculations by Brian G. Marsden (Central Bureau for Astronomical Telegrams) show that C/2002 E2 reached the point in its orbit closest to the Sun (perihelion) last February 21st, at a distance of 220 million kilometers. Although it is moving farther away from the Sun, the comet should remain around 10th magnitude until early April, after which it will slowly begin to fade. Amateur CCD imagers should be able to keep track of it throughout spring and beyond.