A Good Year for Lyrid Meteors

Although typically weak, the annual Lyrid display will benefit from moonless skies and a peak on the morning of April 22nd that favors North America.

Among the widely recognized annual meteor showers, the Lyrid display that arrives every April is seldom very dramatic. Usually the Lyrids produce only about a dozen meteors per hour under dark skies.

But this shower can be fickle. In 1982 its peak intensity under ideal conditions (called the zenithal hourly rate) briefly reached 90. Other short outbursts have perhaps gone unnoticed, and there's always a slim chance of something extraordinary. According to a Chinese chronicle, in 687 B.C. Lyrid meteors "dropped down like rain." In 1803 a newspaper in Richmond, Virginia, wrote of the Lyrid shower:

"This electrical [sic] phenomenon was observed on Wednesday morning last at Richmond and its vicinity, in a manner that alarmed many, and astonished every person that beheld it. From one until three in the morning, those starry meteors seemed to fall from every point in the heavens, in such numbers as to resemble a shower of sky rockets." 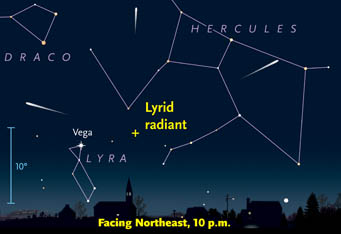 The Lyrid shower's radiant rises as early as 10 p.m., but you'll likely see more meteors once it climbs much higher in the sky before dawn.

Such a spectacle is unlikely to occur during this year's Lyrids, even though no moonlight will interfere. The shower is due to peak on the morning of Sunday, April 22nd, around 5h or 6h Universal Time according to the International Meteor Organization. This corresponds to 1 or 2 a.m. EDT — excellent timing for North America. In most years the peak is rather brief, but what the shower will actually do remains unknown.

The Lyrids get their name from the constellation Lyra, as they appear to radiate from a point near the bright star Vega. They are bits of interplanetary dust shed by Comet Thatcher (C/1861 G1) and scattered along its orbit, which Earth crosses every April. The particles strike our atmosphere at 30 miles (49 km) per second, and they typically create momentary streaks as bright as the stars in the Big Dipper.

The Lyrids is my favorite. Certainly it is only minor, but it was the first recurring meteor swarm I saw, when I began taking an interest in astronomy many years ago.

I live in Northern California and was able to observe an incredible sight of a meteorite zooming across the early morning sky. It was a huge fireball with a rainbow tail. I have never seen anything like it in daylight. I will never consider a Lyrid shower as minor again. What a sight. We also had a loud boom that shook my house several minutes later. Another first for me.