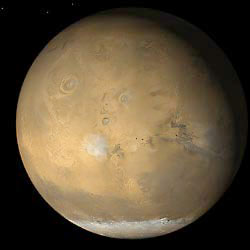 The red planet as seen by Mars Global Surveyor in June 2001, just before the start of a globe-girdling dust storm that hid most surface details from view (click for before-and-after comparison).

THIS ARCHIVED ARTICLE WAS WRITTEN FOR THE YEAR 2003.

This is a special year for Mars. Already the planet is shining big and bright in the southeastern sky before dawn, and it's drawing closer to us week by week. For four weeks from mid-August through early September, Mars will be nearer to Earth, and appear bigger in a telescope, than it has since 1988. And at its very closest, it will be a hair closer than it has been in many, many years.

But how many? Various different figures are being reported in different places; some are clearly wrong. Sky & Telescope sorted through the situation to find the authoritative answer.

There has been some confusion about this because another authoritative source, JPL Horizons gives a time five minutes earlier and a separation 86 km closer. But Horizons expresses all solar-system distances in "apparent" rather than geometric form, which takes into account the motions of Earth and Mars during the time it takes for light to travel between the two bodies. There is no actual discrepancy.

Mars will indeed be truly close. As Belgian astronomers Edwin Goffin and Jean Meeus wrote long ago, "In August, 2003, Mars will come closer to Earth than at any time in the last several thousand years, and an even slightly closer approach will take place in the year 2287" (Sky & Telescope: August 1978, page 107). They also explained why. During recent millennia Mars’s orbit has been getting slightly more eccentric (elongated) due to the gravitational attractions of other planets. Each passing century brings Mars a little closer to the Sun at perihelion, and a little farther from the Sun at aphelion. 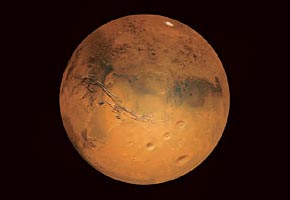 On August 26–27, 2003 — the night of Mars's closest approach to Earth since prehistoric times — Mars will present this face to viewers in the Americas (around 12:40 a.m. Pacific Daylight Time, 3:40 a.m. EDT). This computer graphic by Ralph Aeschliman includes the albedo markings that ground-based telescopic observers typically see. It also shows some surface relief, like the huge Valles Marineris canyon and neighboring volcanoes.

But has Mars ever been this close before? Meeus partially addressed that question in his 2002 book More Mathematical Astronomy Morsels. Working from two papers by the late Pierre Bretagnon on long-term variations in the planetary orbits, he found that Mars may have come closer to Earth about 73,000 years ago than it does this August.

Just as the Meeus book was rolling off the presses, several Web sites began reporting an improved result. According to a calculation by the Association of Lunar and Planetary Observers' Jeffrey Beish and James DeYoung, Mars came a little closer to Earth in 57,537 BC. When he learned of that result Meeus contacted Aldo Vitagliano, an expert in computational celestial mechanics at the University of Naples, Italy. In April of last year, Vitagliano confirmed that there was indeed a close approach in the year 57,538 BC (not 57,537 BC), but it did not quite beat the AD 2003 value.

Vitagliano’s calculation required nearly three hours on an 800-megahertz computer, and it entailed a simultaneous numerical integration of the motions of all nine planets, the Moon, and three asteroids (Ceres, Pallas, and Vesta). At first he adopted JPL’s DE406 as the starting point; then he repeated the calculation using JPL’s earlier DE200. He even experimented to see if omitting the asteroids and Pluto would make a significant difference — it did not. Vitagliano concludes that the last time Mars came so close was in 57,617 BC, when it passed within 55.718 million km of Earth, a little closer than this year’s 55.758 million km.

The ramifications for Mars observers are slight, of course. More important for what your telescope will show on Mars are the quality of the atmospheric seeing (the amount of heat-wave shimmering in Earth's atmosphere, which changes from night to night and sometimes minute to minute), Mars's elevation above the poor seeing near the horizon (Mars never gets very high this year for observers at midnorthern latitudes), and the clarity of Mars's own atmosphere (dust storms could haze it up at any time).

Nevertheless, a record is a record. Mars will be slightly closer than it has been in 59,619 years. If our Neanderthal precursors had been able to use a telescope in 57,617 BC, they could have seen Mars with an equatorial diameter of 25.13 arcseconds (compared to 25.11 arcseconds this August). Mars won’t appear any larger until August 28, 2287, when earthlings will see the red planet 25.14 arcseconds across.