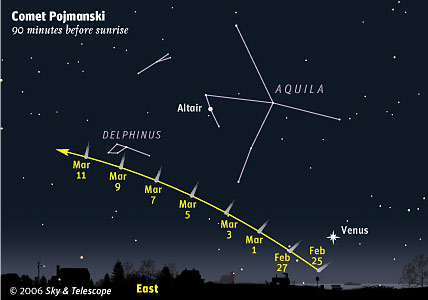 Bright Venus and Altair guide the way to Comet Pojmanski's position in the east just before dawn. Bring binoculars! The comet will not be nearly as prominent as shown here. (The scene is drawn for the beginning of twilight as viewed from near 40° north latitude.) Click image for larger view.

Sometimes comets give us years of advance warning before they come into good view, and sometimes they take us by surprise. On January 2, 2006, Grzegorz Pojmanski at Warsaw University Astronomical Observatory in Poland noticed a 12th-magnitude comet on an image taken the day before in Chile for the ASAS sky survey. The comet was in the constellation Indus in the far southern sky. But as soon as astronomers collected more position measurements and calculated an orbit, it became clear that the object would be heading north as it rounded the Sun. 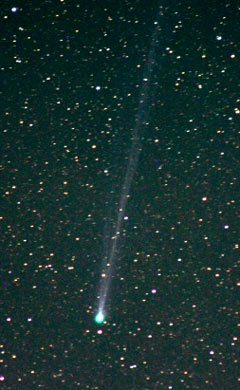 Comet Pojmanski, C/2006 A1, had grown a long tail by March 1st; binoculars observers were reporting seeing it as much as 5° to 8° long. This frame is about 3° high. Michael Mattiazzo in Australia took this image on February 28, 2006, using a Canon 300D digital camera and a 200-mm telephoto lens. He stacked two exposures of 2 minutes each.

By early February Comet Pojmanski (designated C/2006 A1) was brightening faster than expected for a comet on its trajectory. In the first few days of March it was glowing at about magnitude 5.4 low in the dawn for observers at mid-northern latitudes.

Using 10x50 binoculars on the morning of March 6th, I swept it up easily at the start of morning twilight through light pollution near Boston. The comet was a tiny, very condensed greenish fuzzball with a hint of a skinny tail extending upper right. The tail is much more apparent in a dark sky.

The time to look is just as morning twilight begins at your location. To find this time, check that your location and time zone are correct in our online almanac. (And make sure the Daylight Saving Time box is unchecked.)

Go out and scan well to the lower left of bright Altair, as shown above. (The comet is plotted at 12:00 Universal Time on the indicated dates, which is around dawn on the same date in the time zones of the Americas. As days go by, the entire star field including the comet's position shifts to the the upper right with respect to the horizon. Venus remains about the same height above the horizon but shifts slightly left.)

Each morning, Comet Pojmanski will climb a little higher for observers at northern latitudes, but at the same time it's fading. By March 8th the comet is about 20° above the horizon at the start of dawn as seen from 40° north latitude, but by then it should be starting to dim — probably to magnitude 6.2 by March 11th and losing 0.1 magnitude each day thereafter.

If you're south of latitude 40° (Denver, New York, Madrid), the comet will appear higher over your horizon than described above. Seen from farther north, it will be lower.

The comet's orbital elements and an ephemeris are available for entering into sky-mapping software or for plotting on a star atlas as it fades into the distance. Keep up with its doings at the Comet Observation Home Page and the Weekly Information About Bright Comets page.