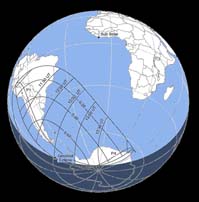 The partial solar eclipse on September 11, 2007, was visible only from South American, the South Atlantic, and Antarctica. Click on image for a larger version.

It’s now 4 p.m. on September 11th here in Buenos Aires, Argentina. The Sun came out an hour ago, and it’s sunny — 6 hours too late.

I’d come to Buenos Aires to see this morning’s partial solar eclipse, but with poor weather prospects, I decided to scramble. I got my ticket changed to go to São Paulo, where the forecast was clear, but I was turned away at the airport check-in at 9 a.m. yesterday because I do not have a current Brazilian visa.

So I decided to try to see the eclipse while in midair aboard an airliner. Then more bad luck: Aerolineas Argentinas was on strike yesterday. All of its flights were canceled. That meant any of my choices for Aerolineas flights today were full, full, full. The competition, Andes Airlines, and other domestic possibilities, were also full all day. So I had to use a foreign carrier, LAN, to fly to Santiago and back. (No visa is necessary for Americans to visit Chile.) 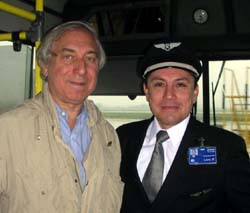 My return flight took off from Santiago just after the eclipse began (6:42 a.m. in Santiago), and it took a very long time to make a slow climb above the clouds. The flight was only 1½ hours long, and it took a half hour just to reach cruise altitude.

Worse, the plane was pointed just to the right of the Sun. Only once did the plane veer enough so I could see the eclipse by eye (through a solar-filter card), and the Sun's disk appeared about 40% covered. I had with me a Nikon D200 with an 80-to-400-mm zoom lens and a Questar filter. But I couldn’t quite get the lens positioned to get a photograph. 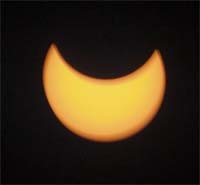 It's a little jittery, but the copilot of a LAN Airlines flight used Jay Pasachoff's camera to capture this shot of the partial solar eclipse through the cockpit window.

All through the flight, the sunlight just outside my window moved a little farther over, but it never reached the point again where I could access it, even when I used a chromium-deposited solar filter as a mirror to get as far over as possible.

Fortunately, I was able to send my camera up to the cockpit, where copilot Ronny Rehpani Padilla took some photos for me. First he tried a variety of exposures, and the best results seemed to be the fastest (1/4000 second). A little later, I sent the camera back, and he took another set. Just at maximum, at 8:48 a.m., I asked for one last set. Two minutes later the pilot announced that we were descending, and we soon went back into the clouds. When we landed at Buenos Aires, it was pouring.

So I can verify with my own eyes that the eclipse took place, and — thanks to a cooperative pilot — I also have some photos to prove it.