Update: Bad news. Apparently no one saw this event despite a path that crossed directly over New York City. Read all about this disappointing result here. 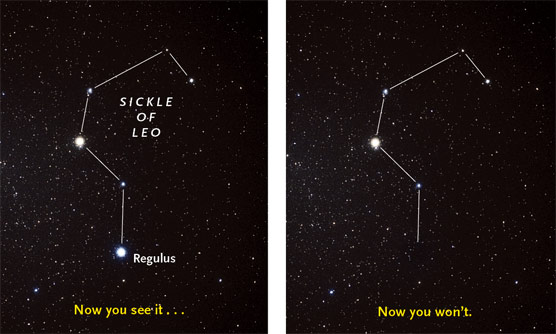 For lucky observers in eastern North America, the bright star Regulus will vanish behind the asteroid 163 Erigone for several seconds on the morning of March 20, 2014. Click image for larger view.

Get ready for the best and brightest asteroid occultation ever predicted for North America. Late on the night of March 19–20, the faint asteroid 163 Erigone (eh-RIG-uh-nee) will briefly eclipse the bright naked-eye star Regulus for more than 20 million people in the New York metropolitan area and parts of Long Island, New Jersey, Connecticut, upstate New York, and Ontario. The star will wink out of sight for up to 14 seconds around 2:06 a.m. EDT on the morning of the 20th for New Yorkers, and a minute or two later farther north.

The predicted occultation path. The blue lines show the outer edges of the zone where Regulus will be blacked out if the prediction is perfect. Astronomers expect the prediction to be closely on target; the actual shadow path is almost sure to fall entirely between the slightly wider uncertainty lines (within the red lines to 68% probability, within the gray lines to 95% probability). Click image for a Google Map view that can be zoomed to any size or resolution.

If the sky is clear, Regulus will be a cinch for anyone to spot — no astronomy experience required! Around 2 a.m. (or a bit before), go out and face the Moon. Extend your arms straight out to your sides. Regulus will be straight above your right hand, roughly as high as the Moon is. It's the brightest star in that area. 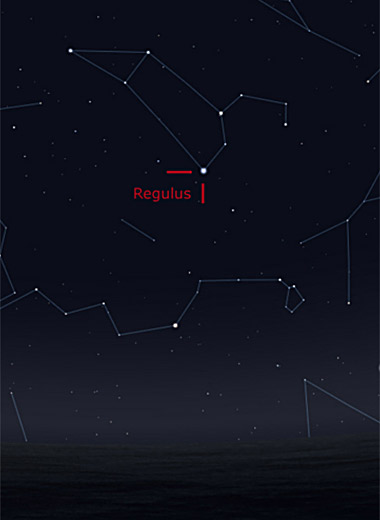 Looking southwest (90° to the right of the Moon) around 2 a.m. EDT on the morning of March 20th. Regulus will appear roughly as high as the Moon. It's the brightest star in the area; you don't need to know, or see, the constellations! Click image for larger view.

"Regulus shines right through moonlight and light pollution that's in the sky — even the light pollution over a city like New York," says Alan MacRobert, a senior editor at Sky & Telescope magazine. "Just be sure to shield your eyes against any glary lights, and Regulus should be easy to find."

Think of it as a space-rock eclipse of a star. Astronomers use the term occultation for these events, from the Latin word for "hide."

Says MacRobert, "I've been using a telescope to go after asteroid occultations of really faint stars for ages. I never thought we'd get one in my life for a star this bright and easy."

In fact, this is the first time in history that an occultation of such a bright star by an asteroid has been predicted to cross such a heavily populated area.

But this is more than a chance to watch a moment of rare celestial drama! Asteroid occultation timers — an elite specialty crowd among amateur astronomers — hope to enlist thousands of everyday folks in a citizen-science project to document this event more thoroughly than any asteroid occultation has been before. You can participate with just your eyes, or with a DSLR camera in movie mode, or with better gear if you're into serious astronomy stuff.

This effort is being spearheaded by the International Occultation Timing Association (IOTA). Its website for the public telling all about the event and how to participate is occultations.org/Regulus2014.

The goal is to see (1) whether the star disappears as seen from your location, and (2) for how long — especially if you can time the event to high precision. Read full details and instructions at the website.

From this data, astronomers hope to obtain a very precise profile of Erigone's size and shape, something that cannot be done any other way short of sending a spacecraft there. This has been done for many asteroids in the past that have occulted fainter stars.

Two past successes. The double asteroid Antiope and big, roundish Interamnia blotted out faint background stars on July 19, 2011, and March 23, 2003, respectively. In each case, dozens of observers scattered across hundreds of miles set up equipment to time the star's disappearance and reappearance. Each yellow line represents one observer watching the star. Accurate timings of when the star vanished and returned (breaks in the yellow line) could be properly fitted with each other to yield the asteroid's actual silhouette. Or for Antiope, two silhouettes! Click image for larger version.

The map at the top of this page shows the predicted path of the Regulus-shadow that Erigone will cast. The blue lines show where the edges of the shadow will travel if the prediction is perfect. Astronomers expect the prediction to be closely on target; the actual shadow path is almost sure to fall somewhere within the outer uncertainty lines.

Similarly, the following predicted times should be off by no more than a minute: 2:06 a.m. for the New York City region, 2:07 where the path runs through central upstate New York (including Syracuse), and 2:08 a.m. where it goes north of Lake Ontario. The shadow will be moving at 11,400 miles per hour.

The shadow path is roughly as wide as Erigone itself, an irregular object about 45 miles across that's orbiting the Sun in the asteroid belt. It's currently 110 million miles from Earth. It's so small and far that it look a dim magnitude 12.4 — 26,000 times fainter than Regulus — so it will be completely invisible in the bright star's glare even with a large telescope.

“A major star winking out like this? It's worth catching if you can," says Sky & Telescope assistant editor Camille Carlisle. She'll be traveling to watch the event with friends in upstate New York.

Not near the path? You're wanted too!

People anywhere from the Carolinas to Nova Scotia to Winnipeg are also encouraged to watch Regulus during the critical minutes and report whether or not it vanishes, and when. The reason? Erigone might have a satellite asteroid accompanying it! Some asteroids do. A "secondary occultation" crossing different territory would reveal such a satellite if it exists. Whether you're near or far from the path, watch steadily from at least 2:00 to 2:12 a.m. EDT for a chance at catching the star being eclipsed by a second, unknown object. (In the Central time zone: 1:00 to 1:12 a.m. CDT). And report via the website whether you see a disappearance or not.

For more about this exciting event, see the March issue of Sky & Telescope, the essential guide to astronomy since 1941.

I realize that I am well outside of the predicted path but wondered if it would still be worth it to have a look.

What do you recommend and if you think I should set up can you give me a prediction for when I should be concentrating on Regulus?

John, there is a very small chance that Erigone might have a small moon in a high orbit. If it does, there is a smaller chance still that it might be aligned just right to occult Regulus as seen from the Dominican Republic. The problem here is that even a small moon in a high enough orbit (high enough so that its shadow would pass over your location) would almost certainly already have been discovered. Low moons very close to asteroids are difficult to resolve from the main body so there's a somewhat higher chance that a small, close moon might have escaped detection. That's a good reason for observers who are just a few miles to a few dozen miles off the track to watch closely. But since your location is so far from the occultation path, I would say that the odds of you seeing anything are a million to one against. Nevertheless, if you're up and the skies are clear, why not, right? You should observe from about 01:40 to 02:10 am (EDT, or 05:40 to 06:10 UT).

I live in Cincinnati, Ohio. I am considering driving to see this once in a lifetime occultation.
My weather preview shows clouds/ snow/ rain along the entire path from NYC to Ontario, Canada.

Any thoughts on a location for best chances to be seen??

Yes, the weather looks bad right now. But we have three days so let's hope the forecast improves. It's an EXCEPTIONALLY rare and extraordinary event. If it's overcast all along the path from New York City up into Ontario, then there are only a few other options. 1) go sailing: get out there on the path somewhere between NYC and Bermuda or further out to the southeast of Bermuda 2) go to Bermuda and hope for clear weather there. 3) go flying: rent yourself a jet and get above the clouds flying along the eclipse path AND keeping Regulus in view to the southwest. 4) wait til next time: the next first magnitude star to be occulted by an asteroid will be Betelgeuse in late 2023. That will be visible from Turkey at the eastern end, across the middle of the Mediterranean, and then out across the Atlantic to the Bahamas.There won't be another such occultation of a first magnitude star visible from New York City for something on the order of a thousand years... Let's hope for better weather!

Regulus is reported to have had a triple conjunction by Jupiter in B. C. 3 due to the retrograde motion of Jupiter. This should be verifiable by anyone with the necessary software.

It's not merely "reported" that there was a conjunction like that a few years "B.C." -it's well-known that ut happened, and it's the basis for one popular astronomical/astrological theory of the Star of Bethlehem. You can read all about it by doing an Internet search on "star of bethlehem regulus theory". Not that this has anything to do with tomorrow night's Regulus occultation, execpt that it looks like it will take divine intervention to see the occultation through the predicted rain and clouds along the narrow ground track.

Hoffelder's corollary (to Murphy's Law), rev 2: The probability of cloud cover at night is a) inversely proportional to the amount of moonlight in the sky, and b) directly proportional to the observer's level of interest in any celestial event, with the latter taking precedence when applicable.

So did anybody see the occultation, or was the entire path occluded by clouds?

Does Clarissa Have a Moon? 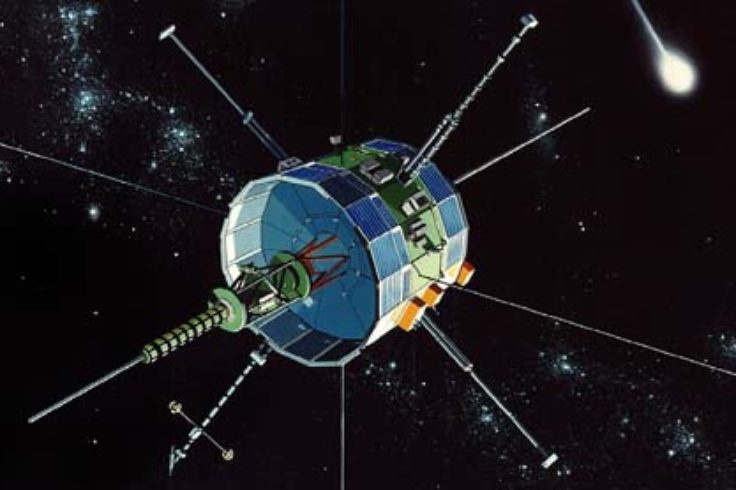