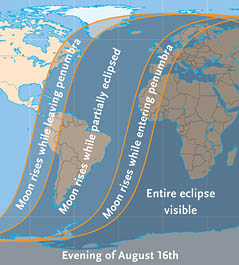 Click on the map to see a wider area, then find your location to see whether the Moon rises or sets during some stage of August 16th's lunar eclipse for you.

Half an orbit after casting its shadow onto Earth, the Moon passes through Earth's own shadow for a lunar eclipse on the night of August 16-17, 2008. Although the eclipse is only partial, it will become deep and spectacular — but not for anyone in North America.

Unlike a total solar eclipse, which can be viewed only from a narrow band on the Earth, a lunar eclipse (partial or total) can be seen from an entire hemisphere. The world map at right shows the regions where the Moon rises or sets during some phase of the eclipse, and where the entire eclipse is visible from end to end. Only North America misses out completely.

The Moon first enters the pale penumbra of Earth's shadow at 18:23 Universal Time (UT or GMT) August 16th, but this event is unobservable. Only after much of the lunar disk has moved into the penumbra will any shading be detectable.

The Moon's entry into the dark umbra at 19:36 UT, when the partial eclipse begins, is much more pronounced. Mid-eclipse comes 94 minutes later, at 21:10 UT. At the that moment, 81% of the lunar disk's diameter is within the umbra. Then the slide outward begins, and the last edge of the Moon leaves the umbra at 22:45 UT — more than 3 hours after the partial phase began. For the record, the penumbral phase ends at 23:57 UT.

From the Netherlands
From Norway
From the Canary Islands
From Iran

For a simulation of how the eclipse will look from anywhere in the world, launch Ade Ashford's Lunar
Eclipse Tracker utility. The observing tool will also depict several upcoming lunar eclipses.

Unfortunately, no total lunar eclipses occur in the near future; the next one isn't until December 2010. But skygazers can't really complain — depending on their location, they got a chance to witness three of them within the 12-month period from March 2007 to February 2008. 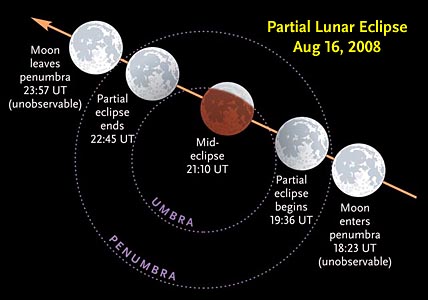 The Moon”™s path through Earth”™s shadow. The eclipse is partial when part of the Moon is within the shadow”™s much darker, red-brown umbra.

What Snuffed Out Star Formation in This “Monster” Galaxy? 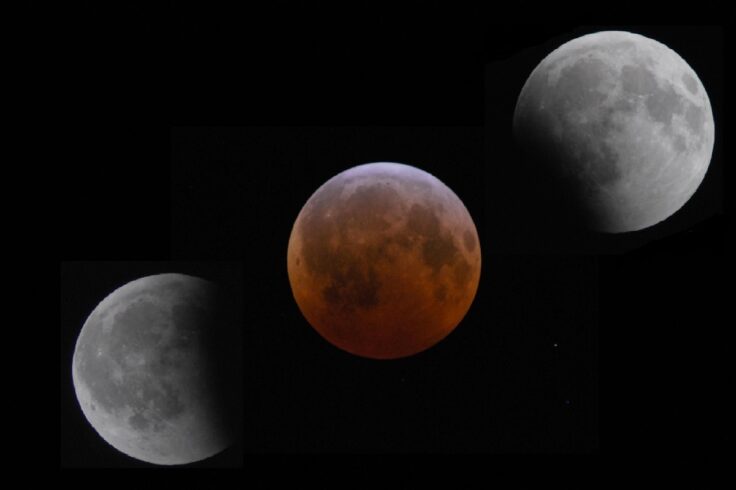 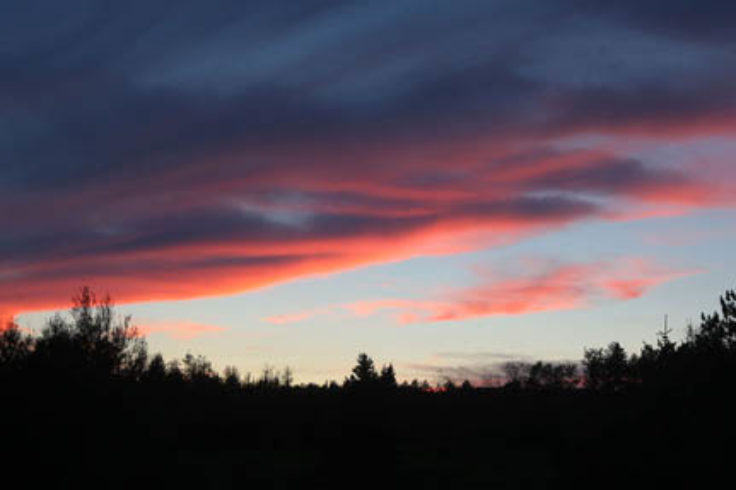 Tiptoe Into The Twilight Zone