V407 Cygni used to be a rather mundane variable star, known only to small elite of variable-star observers, and typically ranged in brightness between 12th and 14th magnitude. But two weeks ago it seized the attention of professional and amateur astronomers worldwide, who'll be keeping a close eye on it from now on.

Japanese amateurs K. Nishiyama and F. Kabashima, nova hunters working the galactic plane, first sounded the alert on March 11th when they announced what appeared to an 8th-magnitude nova near Deneb in Cygnus. Observers quickly realized that this wasn't a stellar debut, but the unexpected eruption of a known faint variable. So what caused a well-behaved star to suddenly erupt violently? 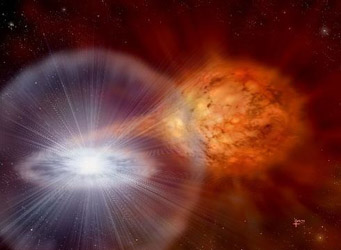 An artist's portrayal of the symbiotic recurrent nova RS Ophiuchi. Its spectrum is nearly identical to that recorded in mid-March during the surprising outburst of the variable star V407 Cygni. Click here for a larger version.

V407 Cygni is a symbiotic variable — a type of close, interacting binary generally containing a red giant (usually an M-type star) and a hotter, smaller white dwarf. They orbit each other inside a shared nebulosity. Typically the red giant transfers matter to the white dwarf via part of its its stellar wind. The rest of the wind gets heated and ionized by the radiation from hot white dwarf, giving rise to the symbiotic nebula.

Such systems are complex. They can vary periodically due to the binary motion, the red giant can vary due to pulsation or the formation of large starspots, or the stars may be partly obscured by circumstellar dust clouds coming and going. The white dwarf and its surroundings may shine more or less constantly as the dwarf accretes and heats gas from the red giant, or the accretion disk around the dwarf may brighten and fade. The mass finally striking the dwarf's surface can result in flickering and quasi-periodic oscillations. If there is a sudden increase in the rate of accretion, or the material in the accretion disk reaches a point of instability and crashes down onto the surface of the white dwarf, the symbiotic system may undergo a brief, nova-like eruption in miniature.

In about 20% of symbiotic binaries, the giant is a Mira-type (pulsing) variable and the paired stars reside in a much dustier envelope. V407 Cygni is one such example. It typically cycles in brightness by a few magnitudes due mainly to the giant's pulsations and was never before witnessed in a nova-like outburst. So no one expected to find it suddenly glowing nearly 100 times brighter than before.

That was just the beginning of the story. Spectra of the system taken on March 13th were different from any recorded for this star or any other symbiotic Mira variable. The giant's normal absorption spectrum was completely overwhelmed by blue continuum radiation from the erupting white dwarf. Emission lines in the spectra revealed two distinct sources: the relatively slow ionized wind of the Mira star, and the rapidly expanding ejecta from the outburst.

Some binary systems, called symbiotic recurrent novae, do exhibit this kind of spasmodic activity. A well-known example is RS Ophiuchi, whose outburst spectrum looks remarkably like that just recorded for V407 Cygni. So perhaps V407 Cygni has joined this rare class.

If that weren't enough, the story took another twist on March 19th. That's when the Fermi Gamma-ray Space Telescope may have detected the star in gamma rays — something never before observed in a symbiotic system. The gamma rays could be caused by shock-driven acceleration of the ejected material and its capture by strong magnetic fields within the system.

By now you may be wondering, "Can I see it telescopically?" Yes! It was magnitude 9.6 as of the morning of March 24th; see recent magnitude estimates.The eruption may last for weeks or months, with brightness variations that could be quite complex and interesting. A large amount of circumstellar material was probably in and around the system already. The expanding debris shell from the white dwarf's eruption should strike this material violently, likely producing many variable phenomena.

V407 Cygni is about 3° east of Deneb, in the northern edge of the dim North America Nebula, at right ascension 21h 2m 10s, declination +45° 46.6′. You can create customized charts for the surrounding star field using this web page provided by the American Association of Variable Star Observers (AAVSO). Choose your field of view (FOV) in arcminutes, your magnitude limit, and the chart's desired orientation. The chart will be centered on the chosen variable. The numbers next to stars are their visual magnitudes to the nearest tenth with the decimal points omitted.

For instance, click on the links below to get: 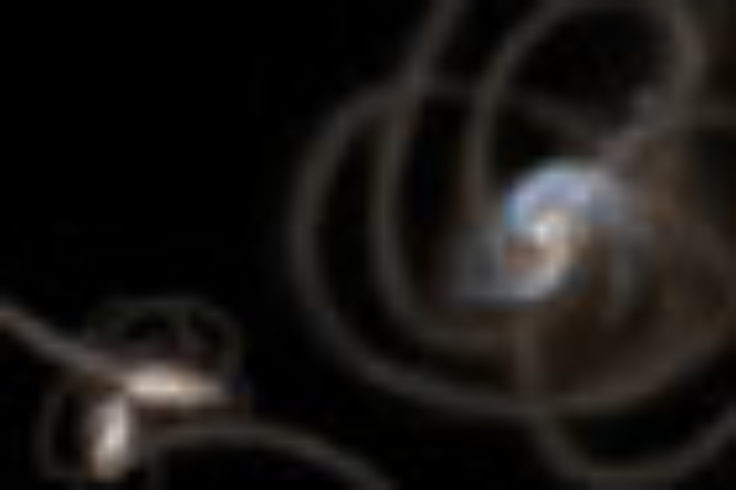