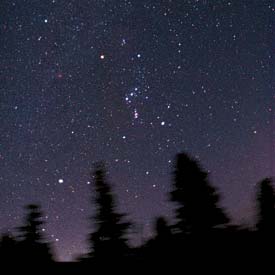 In a dark setting the winter night sky is a star-studded spectacle. Here the constellation Orion, the Hunter, hovers above the trees, with the bright star Sirius to its lower left.

Stars wheel across the heavens as evening gives way to morning. The Moon recycles its phases every month. Planets creep through the starry vault, sometimes gathering together at dusk or dawn. Meteors occasionally rain down from the sky. Stars, including our Sun, intermittently disappear behind the Moon. Constellations come and go as the seasons pass by.

When planning an observing session, skywatchers depend on celestial predictability. But predictable doesn’t mean mundane. During 2005, the Sun, Moon, planets, and stars will intermingle in fascinating ways, providing a year full of variety. And every event, no matter how simple, invites us outside to explore the heavens and, perhaps, discover the unexpected. 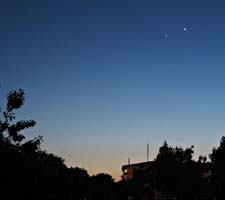 Venus (right) and Jupiter were dazzling in the western sky at dusk on June 2, 2002, one night before their closest approach. This view was recorded from Summit Park in Brookline, Massachusetts, with a digital camera. These two planets will appear together again in the west at dusk in late August 2005.

Every month as the Moon glides eastward through the sky, it passes some of the bright, naked-eye planets. Occasionally, two or more planets gather in one part of the sky; if they’re close it’s called a conjunction. These celestial meetings make for interesting skywatching and often provide fine astrophotography opportunities. Daily celestial happenings featuring the Moon and planets are described in "This Week's Sky at a Glance," but here are a few planetary gatherings that are sure to be eye-catching.

As the year begins, Mars will be low in the east at dawn in the constellation Scorpius. Mars remains in the morning sky for more than half the year as it moves rapidly through the constellations Ophiuchus, Sagittarius, Capricornus, Aquarius, and Pisces. By August it’ll rise before midnight in Aries, where it will remain, except for a brief sojourn into Taurus in late September, for the rest of the year. Mars will be closest to Earth on October 30th and at opposition (the point when a planet is directly opposite the Sun as seen from Earth) on November 7th. It will not appear as bright — or as large in a telescope — as it did during its 2003 opposition, but it’ll certainly be a red beacon in a constellation that’s otherwise devoid of bright objects.

Jupiter rises around midnight in Virgo at the start of the year and earlier as the months progress. After a pretty conjunction with Venus in early September, Jupiter will be lost in the solar glare until it reappears in the east at dawn, still in Virgo, in early November.

Saturn will be prominent in the evening sky in Gemini for the first half of 2005. In late June the ringed planet meets Venus and Mercury low in the west at dusk, but by mid-July it will vanish into the solar glare. Saturn reappears in the east, in Cancer, just before sunrise in late August. During September it lingers near M44, the Beehive Cluster; binoculars or a low-power field telescope will provide fine views.

For a week-by-week update of where the planets are and what they're doing, see "This Week's Sky at a Glance." 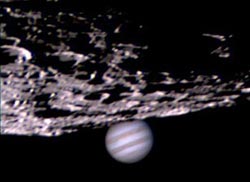 While clouds covered most of the United States, a few lucky observers did witness the occultation of Jupiter by the Moon on the morning of December 7, 2004. Don Parker of Coral Gables, Florida, captured it with his 10-inch Cassegrain telescope and a webcam. Click on the image for a 364 kilobyte animated gif showing the beginning of the Jupiter occultation.

As the Moon moves through the sky, it occasionally occults (passes in front of) a planet, star, or other celestial body, snuffing out its light. The object reappears on the Moon’s opposite side up to an hour later. When a star is occulted, its light vanishes (and reappears) instantly. But when a planet or star cluster is involved, the event takes longer to unfold.

During 2005 the bright stars Antares and Spica will be occulted for the first time in several years. The Moon will also hide Jupiter, Venus, Mars, and the globular star cluster Messier 4 (M4). Many of these (and other) events are discussed in the article "Lunar Occultation Highlights for 2005," though some occultations are visible only from rather remote sites. For further details prior to the more spectacular events, check Sky & Telescope’s Occultation page.

Lunar and solar eclipses are rare and beautiful sights. Although the cause of each type of eclipse is essentially the same — the Sun, Earth, and Moon form a straight line in space, with Earth’s shadow falling on the Moon or vice versa — the visual result is strikingly different.

There are four eclipses during 2005: two solar (April 8–9 and October 3rd) and two lunar (April 24th and October 17th). More information about each eclipse will be available prior to the event on S&T's Eclipse page. 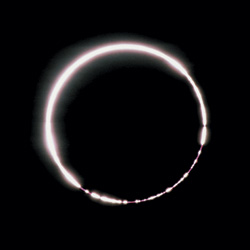 The very close match in apparent sizes of the Sun and Moon at mideclipse on May 30, 1984, left only a narrow ring of sunlight surrounding the Moon, interrupted here and there by mountain peaks along the lunar limb. A similar situation is likely during the annular phase of the April 8th hybrid eclipse.

On April 8–9 the Sun will undergo an unusual annular-total hybrid eclipse. Because the region of visibility straddles the International Date Line, the event begins as an annular, or “ring,” eclipse visible off the eastern coast of New Zealand at sunrise on the 9th. It becomes total for a maximum of 42 seconds in the mid-Pacific, and then is annular again before sunset from Panama, Colombia, and Venezuela on the 8th. New Zealanders will see the Sun rise partially eclipsed, while observers on the west coast of South America, throughout all of Central America and Mexico, and in the southeastern US will see the partial phases in late afternoon on the 8th. Remember, observing a partial eclipse of the Sun without a safe viewing filter is always potentially dangerous.

Two weeks later the Moon will pass through the outer edge of Earth’s faint penumbral shadow, but this lunar eclipse on April 24th will likely go unnoticed by most observers. The slight shading will be greatest from about 2:30 to 3:20 a.m. Pacific Daylight Time.

The year’s second solar eclipse, on October 3rd, is a true annular — the Moon never completely hides the Sun’s disk and at mideclipse is surrounded by a ring of sunlight. The path of annularity starts in the Atlantic Ocean, runs through Spain, Algeria, Tunisia, Libya, Sudan, and Kenya, and ends in the Indian Ocean. Maximum annularity (in Sudan) is 4½ minutes. All of Europe, the Middle East, western Asia, and all but the extreme southern tip of Africa will see the Sun partially eclipsed. 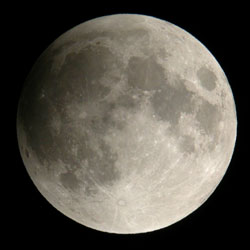 Gary Seronik shot this view of the November 8, 2003, lunar eclipse just as the western edge of the Moon was touching Earth's dark umbral shadow. The faint shading visible to the right of the dark lunar limb is caused by Earth's light penumbral shadow.

The final eclipse of 2005 is a partial lunar eclipse on October 17th. The Moon nicks the umbra (the dark portion of Earth’s shadow) for about an hour, and at mideclipse — 8:03 a.m. EDT, 5:03 a.m. PDT — observers across most of North America (except the northeast) will see some minor darkening of the Moon’s southern limb. This partial eclipse will also be visible from the Pacific region, all of Australia, and much of the Far East.

At one time or another, almost everyone has glimpsed a bright streak of light dashing across the night sky. These sudden celestial visitors are meteors, commonly called falling or shooting stars. Meteors are meteoroids (pieces of interplanetary debris) that vaporize as they plow into Earth’s upper atmosphere. If a meteoroid survives its fiery plunge to the ground, it’s called a meteorite. 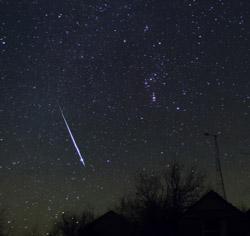 A bright meteor from the 2004 Geminid meteor shower was captured with a tripod-mounted digital camera and a 16-mm lens. It’s a 1-minute exposure at f/2.8 with an ISO setting of 800.

An average of six sporadic (random) meteors per hour may appear on any night. But at certain times of the year our planet slices through streams of dust and dirt left behind by passing comets. When this happens Earth experiences a meteor shower, and you might see meteors at a rate of one every few minutes, though there are often bursts and lulls. Shower meteors can appear anywhere in the sky, but their direction of motion can always be traced back to the constellation whose name the shower bears. This apparent point of origin is known as the radiant. Meteor showers are best observed in the predawn hours. A list of the major upcoming showers can be found in S&T's Web article "Upcoming Meteor Showers."