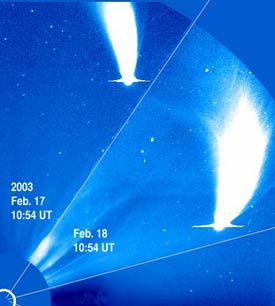 Gary W. Kronk prepared this four-image collage of Comet NEAT rounding the Sun taken by the SOHO spacecraft at 10:54 UT from February 17th through 20th inclusive. The white circle at lower left represents the outline of the Sun.

During the evening of November 6, 2002, astronomers using the 1.2-meter reflector at Haleakala, Hawaii, discovered a 17th-magnitude comet as part of the Near Earth Asteroid Tracking (NEAT) program. Designated Comet NEAT (C/2002 V1), it reached perihelion (closest approach to the Sun) just 0.099 astronomical unit from our star (one-fourth the mean orbital distance of Mercury), at about 7 hours Universal Time on February 18th. At the time the comet may have been as bright as magnitude -2, but it was visible only to the Solar and Heliospheric Observatory (SOHO) spacecraft.

The comet is now outward bound, and observers in the Southern Hemisphere are currently able to glimpse Comet NEAT low in the west-southwest shortly after sunset. According to Sky & Telescope associate editor Greg Bryant, several Australian amateurs saw it last weekend (March 1–2) and reported it was visible to the naked-eye as twilight's glow diminished. However, the comet is fading rapidly and will soon be visible only in binoculars or telescopically.