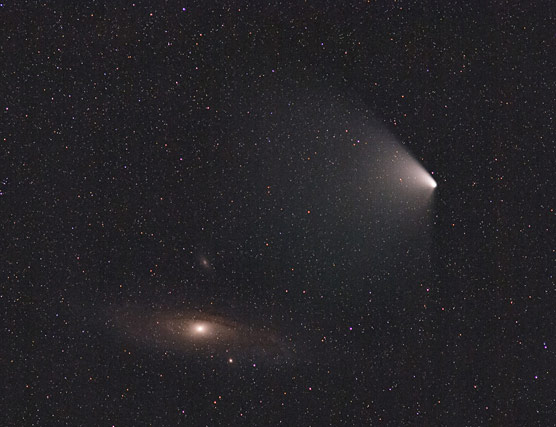 Skywatchers in the latitudes of the northern U.S., Canada, and much of Europe are getting better conditions for observing and photographing Comet PanSTARRS — even as the comet fades as it flies away from both Sun and Earth.

Throughout the first week of April, the comet is making a wonderfully photogenic pass by the Andromeda Galaxy, M31, presenting astrophotographers at northerly locations with a unique opportunity. The image above was taken on the morning of April 4th, and this deep image was taken on March 30th. The comet passed closest to the showpiece galaxy in the early hours of April 4th UT. The tail continues to widen as seen from Earth's perspective.

The comet is now actually higher before dawn, in the northeastern sky. But the waning Moon is up then (though dimmer every morning; last quarter was on the 3rd). Evening is when northern imagers can catch this departing visitor with no interference from either twilight or moonlight. The farther north of 40° latitude you are the better.

Some recent brightness estimates put the comet at about 4th magnitude, slightly fainter than M31. Other observers say it's slightly brighter than the galaxy. This depends on the darkness and quality of your sky; the comet's head is more concentrated and has a higher surface brightness than the galaxy's inner portion.

As for visual sightings, from my latitude of 43° I could not see it naked-eye on March 30th, though it was still easily visible in my 70mm spotting scope.

"On March 31st with excellent transparency, Comet PanSTARRS was visible with the unaided eye exactly two hours after sunset. It is now in the same binocular field of view as 3.4-magnitude M31, and the comet is about 0.5 magnitude brighter than the galaxy, making the comet about magnitude 3.

"In a 4.2-inch Astroscan at 64x, the broad, fanned tail was about 0.7° long, sharper and slightly curved on the preceeding edge. The pseudonucleus is nearly stellar."

Send us your observations and photographs! Post your pix in the Comet PanSTARRS section of our Photo Gallery. 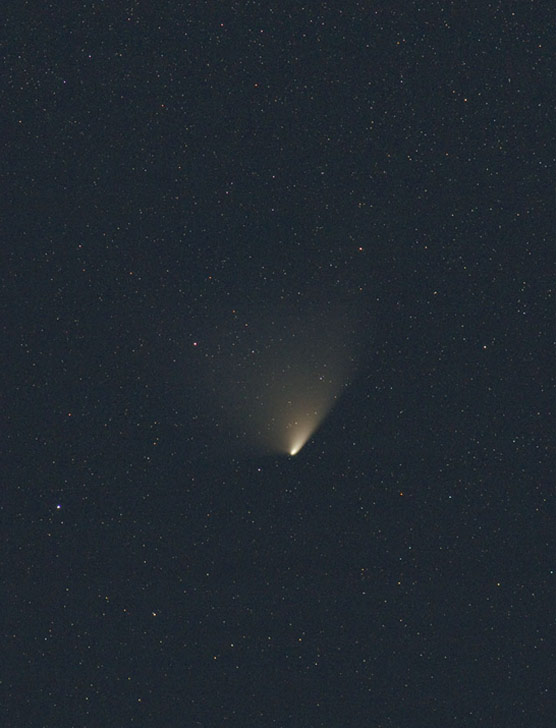 On March 30th in southern New Hampshire, Sean Walker took many exposures of the comet during 40 minutes as twilight faded out. For this stack, "the total exposure was 20 minutes at f/4, ISO 800," he writes. He used a Nikon 180mm f/2.8 lens on a Canon 1000D DSLR camera. The comet was invisible to the naked eye but easy in a spotting scope. 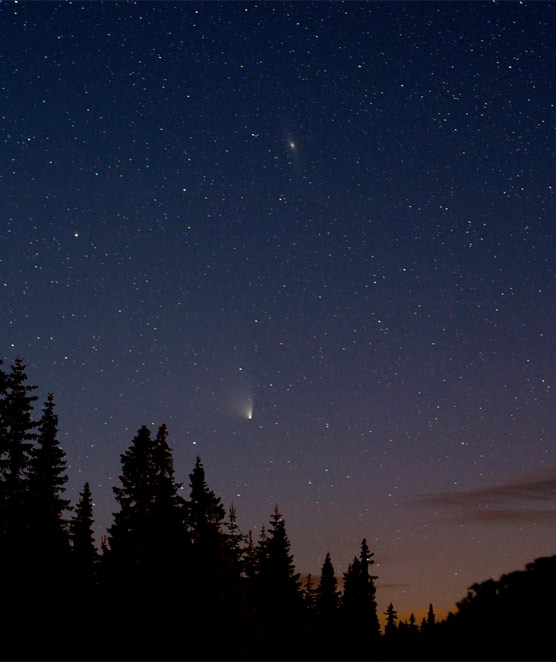 Comet PanSTARRS was still 8° from the Andromeda Galaxy on March 28th, when HÃ¥kon Dahle took this photo from Skeikampen, Norway. The comet will pass 2° from the galaxy on the night of April 3rd. Click for larger view and more information courtesy Spaceweather.com.

Also, this amazing shot was taken by Michael Jaeger and Hohe Tauern on April 1st.

That is a great photo. It gives you a great idea of the enormous size of the Andromeda Galaxy which is heading straight this way.

Just wondering if anyone has tried stacking photos with Photosynth. It seems to work pretty well with terrestrial pics, but I don't think I've ever seen anybody try astrophotos with the app.