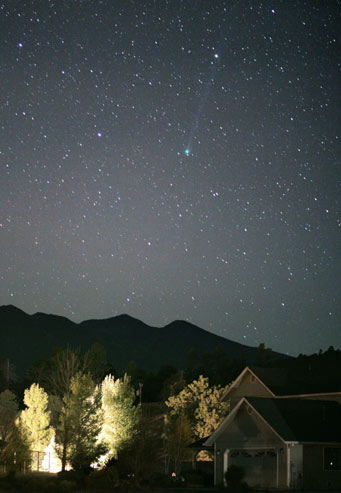 Comet SWAN was in Hercules on the evening of October 27th when Brian Klimowski took its image from Flagstaff, Arizona. The fuzzy white blob in the outer tail is the globular cluster M13. Klimowski used a Canon 5D digital camera with an 85mm lens at f/1.8 to take ten 15-second exposures (stacked there) at ISO 1600.

Photo by Brian A. Klimowski.

After flaring up to magnitude 4½ in late October, Comet SWAN (a.k.a. C/2006 M4) is fading now as it moves farther from both Earth and Sun. As of November 20th it's down to about magnitude 8. But that still leaves it in view for telescopes.

The sudden flareup happened on October 24th. On the 26th I swept up the comet immediately with an 8x50 finderscope despite suburban light pollution. It was a round, very condensed (centrally concentrated) greenish fuzzball with hints of the long, straight, upward-pointing tail that was so prominent in deep images. The comet's head was much brighter than the globular cluster M13 nearby. In my 12.5-inch reflector at 75x, the nucleus was very bright, but I saw no streamers. The outer coma practically filled the ¾° field of view with a greenish glow.

I didn't switch to higher power because a crowd of visitors were waiting in line for a view! But other telescopic observers were reporting streamers streamers in the inner coma near the nucleus. Imagers F. Montanucci, G. Sostero and E. Guido in Italy wrote, "The inner coma of this comet is showing a remarkable evolution. The visibility of several jets is strengthened (one obvious feature points toward SE). The central condensation shows a very odd, 'peanut-like' shape. Several streamers point to the ion tail."

Meanwhile, observers with dark skies were able to spot the comet (dimly) with their unaided eyes.

By November 9th it was much dimmer in 10 x 50 binoculars and appeared much less condensed: an elongated, grayish glow still with a hint of upward tail. On the evening of November 10th I got the 12.5-inch reflector on it at 75x and 310x. The nucleus was less starlike than before, but straight rays were apparent in the coma, especially at the higher power. In the 8 x 50 finderscope the comet was still visible but not easy.

To find the comet you'll need to know exactly where to look. In late November it is crossing Aquila, as indicated on the chart here. At month's end it passes just a couple degrees south of Altair, but by then it will have faded much more.

Note that the dates on the charts are for 0:00 Universal time, which falls on the evening of the previous date in the time zones of the Americas.

More information is in the November Sky & Telescope, page 60. Here are some images; here are some more.