Skywatchers were out in force for the familiar Perseid meteor shower peaking in mid-August at the dark of the Moon. So why bother with a shower that almost nobody has heard of coming two weeks later in bright moonlight?

Because the Aurigids are this summer’s skywatching wildcard.

The Perseids are the "Old Faithful" of meteor displays, whereas most years the Aurigids produce little or nothing. But three times in the last century, skywatchers were surprised by a short-lived burst of bright meteors emanating from the direction of Auriga early on the morning of September 1st. Circumstances appear excellent for a repeat in 2007, with a small chance that the shower could turn extraordinary. So well-positioned meteor observers — those in far-western North America and Hawaii — are going on high alert. 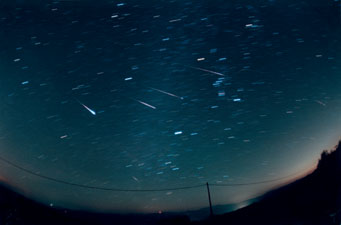 No Aurigid outburst has yet been photographed (hint, hint). But during the 1998 Leonid fireball shower, Lorenzo Lovato caught four bright meteors in this single 9-minute, wide-field exposure. One prediction suggests that any shower on the morning of September 1st would be especially fireball-rich.

The first known Aurigid outburst came in 1935, when on the night of August 31–September 1, astronomers Cuno Hoffmeister and Arthur Teichgraeber of Sonneberg, Germany, witnessed an unexpected and moderately strong meteor display. It appeared to radiate from a spot near the star Beta Aurigae, not far from Capella. Orbital expert Vladimir Guth immediately suggested that the meteors came from Comet Kiess (C/1911 N1), which followed a similar path through space and last came through in September 1911. It has an orbital period of approximately 2,000 years.

Then in 1986, meteor watcher Istvan Tepliczky of Tata, Hungary, went out on September 1st around 1:00 a.m. local time (0:00 Universal Time) for a night of observing. "Just after 1:00 UT", he wrote, "I was an eyewitness of a very spectacular phenomenon. Very bright yellow meteors began to fall; all of them left long trains... Around 1:20 UT I detected meteors every one or two minutes." The shower tapered off slightly after 1:30, and he saw his last meteor at 2:12 UT.

The Aurigids made their most recent appearance on September 1, 1994, caught by experienced meteor observers Robert Lunsford and George Zay at Descanso, California. Considering how few observers our knowledge of these events comes from, Aurigid displays may have happened in other years without being noticed.

At the August 2006 International Astronomical Union meeting, Peter Jenniskens of the SETI Institute’s Carl Sagan Center announced that the Aurigids are likely to come to life again this September 1st. He based his forecast on calculations by himself and Jérémie Vaubaillon of Caltech, and on earlier work done in collaboration with meteor astronomer Esko Lyytinen of Finland. Working from positions of Comet Kiess recorded in 1911, they determined that prior to that appearance, the comet last swept around the Sun in roughly 82 BC.

At that time the comet should have released a trail of fine rubble following along its path. Some of this comet dross from more than 2,000 years ago, the astronomers found, should only now be completing its first revolution around the Sun, decades behind the comet. Jenniskens showed that the Aurigid outbursts of 1935, 1986, and 1994 all arose when Earth passed through this one lengthy debris trail. And now the stage is set again. 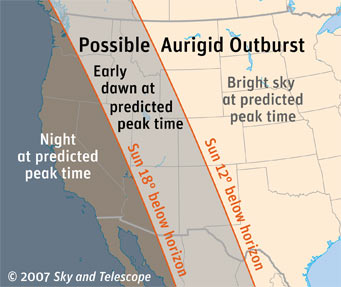 The Far West is the place to be for watching whether the Aurigids erupt before dawn on September 1st. The shower”™s peak is predicted for about 4:37 a.m. PDT. However, the time prediction could be a little off, the shower may last up to an hour, and some of the meteors may be bright enough to show through a lot of twilight. So observers somewhat east of the prime area could have a chance as well.

On Saturday morning, September 1st, around 11:37 UT (plus or minus 20 minutes), Jenniskens and Vaubaillon expect Earth to pass smack through this one-revolution rubble trail from Comet Kiess. The timing favors far-western North America, as shown on the map at right. In this region 11:37 UT falls before the first light of dawn, with Auriga very high in the northeast (roughly 60° or 70° up) — ideal circumstances.

For Hawaii, the radiant will be much lower at that time (1:37 a.m. Hawaii Standard Time). So any shower members seen will be earthgrazers that skim far across the top of the atmosphere nearly horizontally and leave long, colorful, persistent trains (as observed in 1986 and 1994).

Unfortunately, the rest of North America will be in bright twilight or daylight.
Like the previous outbursts, the upcoming display should be short-lived, probably lasting no more than an hour or so.

"What makes this shower so special," notes Jenniskens, "is the opportunity to see bits and pieces of the comet’s original crust." Long-period comets have just recently returned from cold storage in the Oort Cloud and are still covered by a crust that resulted from 4.5 billion years of exposure to cosmic rays. When the comet returns to the inner solar system, that crust is crumbled and creates peculiar meteors.
"The only other time that a dust trail of a long-period comet was investigated, during the 1995 Alpha Monocerotid outburst, it was found that the meteoroids had lost all their volatile sodium minerals," continues Jenniskens. "There will be no other chance to study long-period-comet dust trails in the next three decades."

A drawback will be the bright waning gibbous Moon, 84% illuminated in nearby Aries. But because the Aurigids ram into our atmosphere at exceptionally high speed (66 kilometers, or 41 miles, per second), and because the particles are predicted to be relatively large, any shower should be rich in bright meteors, with many in the range of magnitude +1 to 0. "So," says Jenniskens, "the Moon probably won’t dim much of the display."

As to how many you might see, the safest forecast is perhaps 20 to 30 per hour.
But Lyytinen is predicting many more, with a zenithal hourly rate (ZHR) reaching a few hundred. Lyytinen also expects the peak to arrive a few minutes earlier than Jenniskens and Vaubaillon: around 11:20 UT.