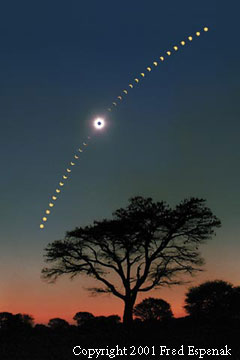 Fred Espenak witnessed the June 21, 2001, total solar eclipse under near-perfect sky conditions from Chisamba, Zambia. He used two identical cameras to create this dramatic sequence — one captured totality and the thorny acacia tree in the foreground, while the other recorded the partial phases through a solar filter.

Every 12 to 18 months the Moon passes directly between the Sun and some portion of the Earth. As a consequence of this unique alignment, the Moon's dark shadow, or umbra, races across our planet and traces a long and narrow, but quite predictable, track. Those lucky enough to be within the shadow's path will witness what is arguably the greatest of all natural phenomena — a total eclipse of the Sun. The eerie midday darkness and the sudden appearance of the Sun's glorious corona are experiences never to be forgotten. But this beautiful celestial event also gives solar astronomers a rare opportunity to probe the mysteries of the Sun's incredibly hot outer atmosphere.

The last total solar eclipse occurred in June 2001 and was visible from a 170-kilometer-wide path that traversed southern Africa from Angola to Mozambique, as well as Madagascar
(Sky & Telescope: September 2000, page 32). Fair weather along the shadow's track gave both eclipse scientists and tourists their best views in two years. So what are the options for this year's total eclipse?

The Path of Totality 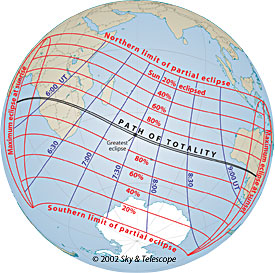 The path of the Moon's umbral shadow for the December 4, 2002, total solar eclipse begins at sunrise in the South Atlantic Ocean. It crosses southern Africa and the Indian Ocean, ending at sunset in southern Australia. Partial phases of the eclipse can be seen over a much broader region, including most of Africa, western Australia, and Antarctica.

On Wednesday, December 4th, the Moon's shadow returns to the Dark Continent for an encore performance and makes a brief appearance Down Under. But unlike last year's event, the 2002 eclipse sports a narrower track and a much shorter duration. Its 12,000-km-long path actually starts in the South Atlantic at sunrise, when the Moon's umbral shadow first touches down on Earth at 5:50 Universal Time. The duration is only 26 seconds as seen from the center of the 31-km-wide path.

Seven minutes later, the umbra reaches the Atlantic coast of Angola. By coincidence, the 2002 track first crosses a piece of Angolan real estate that also fell within the path of the 2001 eclipse. Thus, the local residents have a unique opportunity to witness a total eclipse twice within the span of 18 months. Typically one must wait, on average, about 375 years or more to see two total eclipses from the same spot (Sky & Telescope: April 2000, page 63).

From Angola, the early-morning eclipse lasts 51 seconds with the Sun 19° above the horizon. Heading southeast, the umbra carves out a 50-km-wide path as it sweeps across the civil-war-torn nation. Briefly straddling the Angola-Zambia border, the shadow crosses eastern Namibia before entering northern Botswana at 6:09 UT. The path's width has now grown to 60 km, and totality lasts 1 minute 11 seconds. Following the political boundary between Zimbabwe and Botswana, the umbra travels with a ground speed of 1.2 km per second. The village of Bulawayo, Zimbabwe, lies just north of the track, and its residents will witness a deep (99 percent) partial eclipse at 6:14 UT.

The umbra crosses completely into Zimbabwe before entering northern South Africa at 6:19 UT. One minute later, the northern third of Kruger National Park is plunged into darkness, which lasts 1 minute 25 seconds as the hidden Sun looms 42° above the horizon. Quickly crossing southern Mozambique, the shadow leaves the African continent at 6:28 UT and begins its long trek across the Indian Ocean.

The instant of greatest eclipse occurs at 7:31:11 UT, when the axis of the Moon's shadow passes closest to the center of Earth. Here totality reaches its maximum duration of 2 minutes 4 seconds, with the path 87 km wide and the Sun 72° high. Unfortunately, the lunar shadow will then be far out at sea, about 2,000 km southeast of Madagascar.

During the next hour and a half, the umbra races across empty ocean as the eclipse track curves to the northeast and begins to narrow. In the final 90 seconds of its terrestrial trajectory, the shadow bisects South Australia. The coastal town of Ceduna, which lies at the center of the 35-km-wide path, is engulfed by the Moon's shadow at 9:10 UT. Darkness lasts 33 seconds, with the Sun standing a mere 9° above the western horizon. In the waning leg of its journey, the increasingly oval shadow pushes deeper inland, across 900 km of the Australian Outback. It finally leaves Earth's surface at sunset at 9:12 UT. In the course of 3 hours and 21 minutes, the Moon's umbra travels along a path nearly a third of the way around the globe but covering only 0.14 percent of its surface. 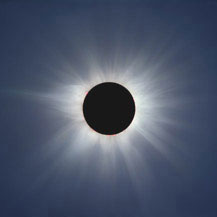 This dramatic view of totality shows delicate white streamers in the corona and several red jets of hydrogen gas peeking out from behind the silhouetted Moon. This view of totality faithfully reproduces how the eclipsed Sun actually appeared in the sky over Carlos's observing site at the Barn motel in Lusaka, Zambia, on June 21, 2001.

Last year's eclipse occurred at the height of Africa's dry season, with clear skies favoring most of the path of totality. In contrast, the 2002 eclipse takes place during southern Africa's rainy season, and the prospects for sunny weather are much slimmer. Southern Australia doesn't experience as dramatic dry and rainy seasons as Africa, and it offers substantially better cloud prospects. The time of day and the low altitude of the Sun erode some of this advantage, but in the end the Australian eclipse track promises moderately better prospects than Africa.

The choice between Africa and Australia is a difficult one. Australia has better weather prospects, especially in the Outback, where the average cloudiness is nearly 20 percent less than in Africa. On the other hand, high temperatures expected inland and gusty coastal winds are considerable challenges to the Australian eclipse chaser. Furthermore, the low altitude of the eclipsed Sun magnifies the effect of even a small amount of cloudiness, especially the deep cloud cover that comes with upper-level disturbances.

In comparison, Africa offers a duration that is three times longer, a higher Sun, a greater observing altitude, and the prospects of a cleaner sky for discriminating photographers. Climatological measurements offer the best basis for selecting a fixed site, but African weather is highly variable. A mobile group might wish to choose a location with less-favorable climate statistics but permitting rapid movement in response to weather systems within a day or two of the eclipse.

On balance, it would seem that the chances of seeing the eclipse in Africa are a little more than 60 percent in the best areas, and in the Australian Outback about 70 percent. Coastal regions of Australia fall between these limits.

Given the short duration of totality and challenging weather prospects, some observers may choose to skip the 2002 eclipse altogether. Looking ahead, 2003 offers a frigid and expensive eclipse trek to Antarctica, while 2004 offers no total eclipses. The eclipse of 2005 is even shorter than 2002 and can be seen only from the sea. Under the circumstances, the 2002 eclipse presents the last good opportunity to witness the grandeur of totality for several years to come.

Read this article in its entirety in the June 2002 issue of Sky & Telescope magazine. 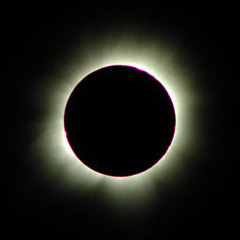 Fred Espenak and Jay Anderson have prepared a NASA bulletin for the 2002 total solar eclipse. The 77-page publication contains detailed predictions, tables, maps, and weather forecasts. You can obtain single copies free of charge by sending a 9-by-12-inch (22½-by-30½-centimeter) self-addressed envelope stamped with sufficient postage for 12 ounces (340 grams) and with "TSE 2002" printed in the lower-left corner. Use stamps only, since cash or checks cannot be accepted. Requesters from outside the United States and Canada should send 10 international postal coupons. Mail requests to Espenak at Code 693, NASA/Goddard Space Flight Center, Greenbelt, MD 20771.

Homing in on the Source of a Mysterious Fast Radio Burst 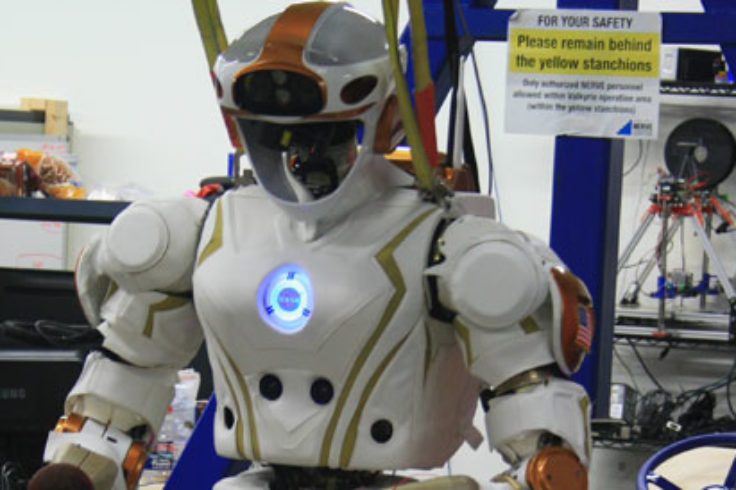 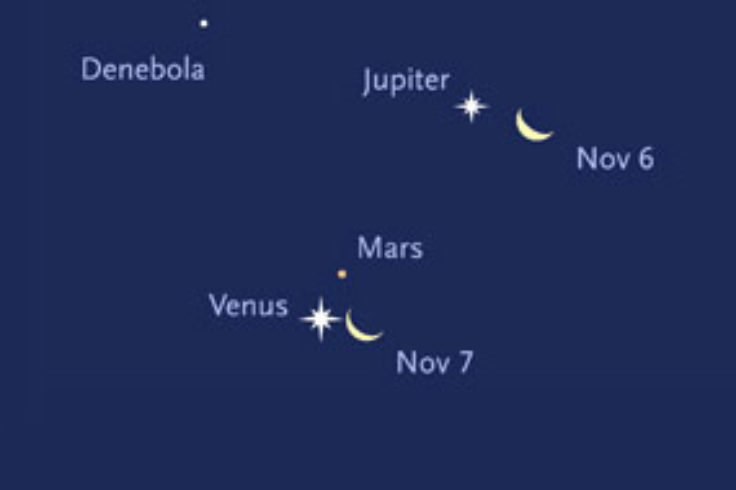